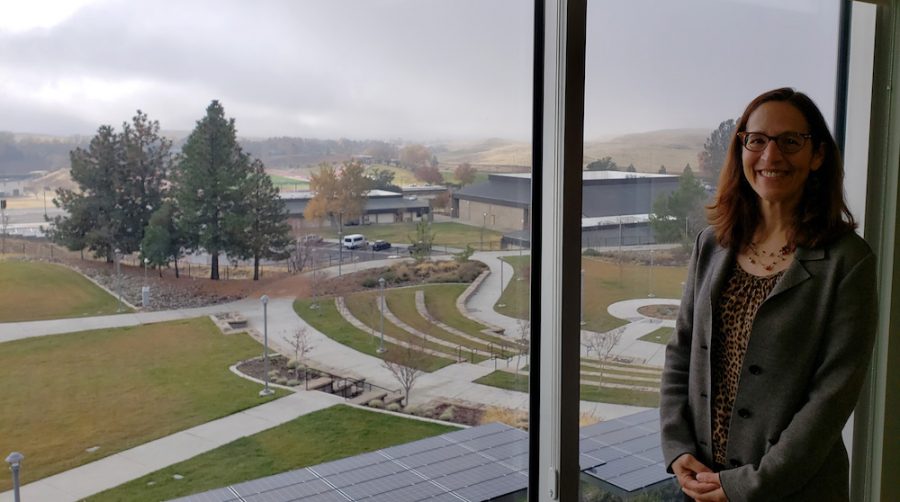 Samia Yaqub in front of her third story window where she could see damages from the Camp Fire on the outskirts of the Butte College campus. Photo credit: Josh Cozine

President of Butte College, Samia Yaqub, stood up and walked over to the south-facing window of her office on the third floor of the Student and Administrative Services building of the college’s main campus. From the high vantage point she began pointing out burnt and blackened patches of fields that surrounded the college where the Camp Fire had encroached just up to the campus gates.

Butte College Chief of Police Casey Carlson was also in the office. Despite the fact he and his family evacuated from Paradise, he still organized the set up of the Public Safety Training Grounds (PSTG) area, which is often called upon during large scale disasters and repurposed into a base of operations for law enforcement and fire personnel.

“There’s plenty of parking, internet connectivity, and when power shuts down we can bring in a generator and everything is connected and ready to-go,” Carlson said.

Before the Camp Fire, Butte College’s PSTG has served as an operation base for other fires, and the Oroville Dam spillway crisis last year. The college also shared over $40,000 worth of fuel with Cal Fire.

“It was just more efficient for them to fuel up here,” Carlson said, rather than driving into Chico or Oroville to compete with the long lines that plagued most gas stations the first day of the evacuation.

The fire was first reported miles away in the small community of Pulga, just after 6 a.m. By noon it had spread so quickly that Yaqub made the decision to cancel all classes and evacuate the campus. Students from Paradise, who even at that early hour quite possibly had no home to return to, were loaded onto buses and taken to the Butte County Fairgrounds which had opened as an evacuation center.

Chief Carlson kept an eye on the fire the entire first day, other than a brief early morning trip up to Paradise to evacuate his family and his travel trailer which now serves as his home for the time being. It wasn’t until the early hours of the next morning, after fire personnel had bulldozed large fire break lines all around the campus, that he finally reported the campus as safe.

“I didn’t feel comfortable about saying that until about 1 ‘o’clock in the morning,” Carlson said.

“The campus acted almost like a seawall,” Carlson added, noting how the fire came up against it and burned in an almost triangle like pattern around the college as it reached the fire-break lines set up by Cal Fire, which also helped to slow the spread of the fire to other areas around the college.

According to Carlson, if the winds had shifted the wrong way, it could have done much more damage to the campus. Thankfully, only one structure was lost, a remote pump house, along with damage to the solar array that powered it. All totaled the damages to the pump house and infrastructure came to around $500,000 Yaqub said.

Carlson also added that all campus buildings had to have their air filters changed out prematurely, but overall it could have been much worse.

Classes started back in session Nov. 26 at Butte College, and so far Yaqub says that despite the difficulties, students and faculty have said they are happy to be returning.

“People need the return to normalcy,” Yaqub said. “It’s an important part of the healing process after a crisis.”

So far 112 students have dropped out, a number she wishes was smaller, but considering the size of the catastrophe she says it could have been much higher. Also, considering the extent of the damages she says it’s been difficult to decide how to go forward, but she’s fallen back on campus values to help her make decisions.

“Our first campus value is ‘students first,’” Yaqub said. “So that leaves us with a guideline. Other things can take a back seat.”

Yaqub said she’s “giving professors creativity” to work with students after missing so much class time, especially those directly affected by the fire. She’s also asked faculty to reach out to any student who has been affected, and ask them what they need. The college has set up a GoFundMe page to aid students affected by the Camp Fire, which has nearly reached $40,000 at the time of this writing, and has started sending out its first checks already.

She said the first person to donate was a Paradise resident who had lost everything and donated their last $2.

“The generosity of the community has been simply amazing,” Yaqub said.