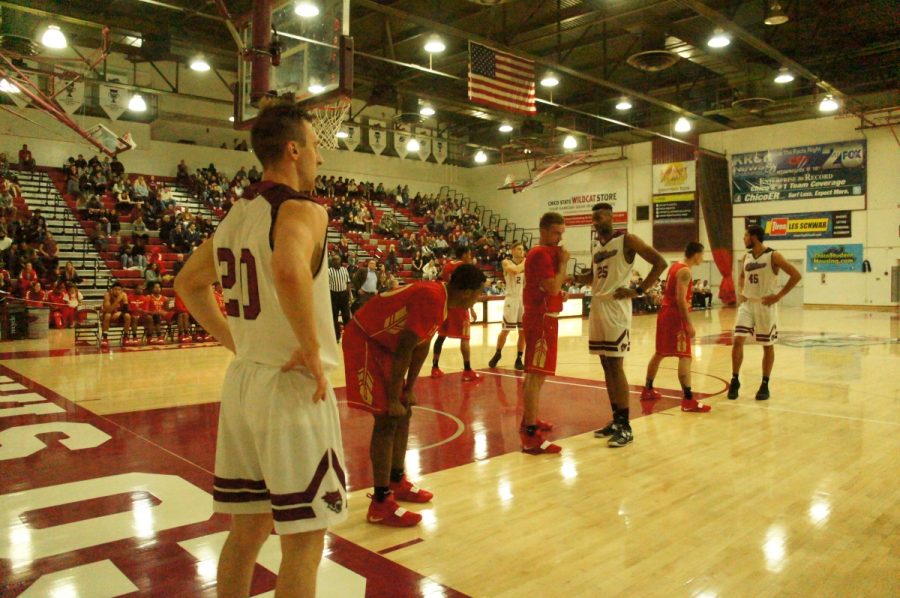 Chico State men’s basketball earned their first win of the season in their home opener versus Stanislaus State with a ton to build off of. The Wildcats flipped the story of their cold spell shooting the ball and pieced together a complete game together on the defensive end.

Chico State entered Thursday still trying to get their feet under them as a unit due to the cancellation of their first five games. While teams in the California Collegiate Athletic Association are entering the prime of the season, the coaching staff is still trying to find the identity of their rather young group.

“We mixed the starting lineup every game. I’m trying to find the right combinations,” Head coach Greg Clink said. “We haven’t had any exhibition games to find out who should be playing, who should be starting.”

The Wildcats, from the jump, played with a sense of urgency and willingness to find the open man. They found ways to get in the lane, either with the drive or post entries, for kick-outs to their knockdown shooters. With Isaiah Brooks at the head of the offense, the Wildcats were able to drain 5 threes just through the first 10 minutes of play with Brooks finishing with eight points in the first half.

“It was our ball-movement and commitment to be unselfish,” Assistant coach Mark Darnall said. “We struggled to shoot the ball our first two games, and we were finally good with our ball and player movement. Guys committing to it were able to get open looks for their teammates.”

Chico was able to get out to an early 15 point lead with a lot of energy. They would hit an offensive wall for the later part of the first half, allowing Stanislaus to quietly break out into a 10-0 run. They headed to the locker room having their lead shaved down five after a difficult turn around jumper from Marvin Timothy on the left post to close the half.

“We just told them that they have to keep committing to defending. That’s been the message here for 40 minutes of defense,” Darnall said. “Especially during those runs, we hit adversity and they still tried to defend hard even when they were struggling to put the ball in the basket.”

Chico State came out into the second half with Justin Briggs at the helm of the charge. Briggs, who only had two points in the first, went on an absolute tear in the second half. In the opening minutes, he sent a layup straight back to the ground, sprinted to the opposite end of the court to receive a dime for a a rim racking slam.

Briggs finished the game with eight rebounds, with five of those coming on the offensive end, and six in the second half alone. He dominated the paint on both ends with multiple powerful slams that left the gym rocking. He was perfect from the field with six shot attempts in the second.

“We went into the locker room fired up after Marvin hit that big shot,” Justin Briggs said. “We all went in their hyped up, so we tried to come out as aggressive as possible.”

The Wildcats handled the second half with ease after Briggs’ offensive spurt in the early second. They were even more scrappy on defense, holding Stanislaus State to 9-32 shooting in the half. They continued their unselfish play finding open shooters finishing with 45 percent shooting from three point range.

“Being home was good,” Clink said. “Playing in a familiar atmosphere, but the thing I’m most proud of is our resiliency to fight through the adversity that we had the first six weeks of the season.”

Wesley Harris can be reached at [email protected] and flacko_flame on twitter.