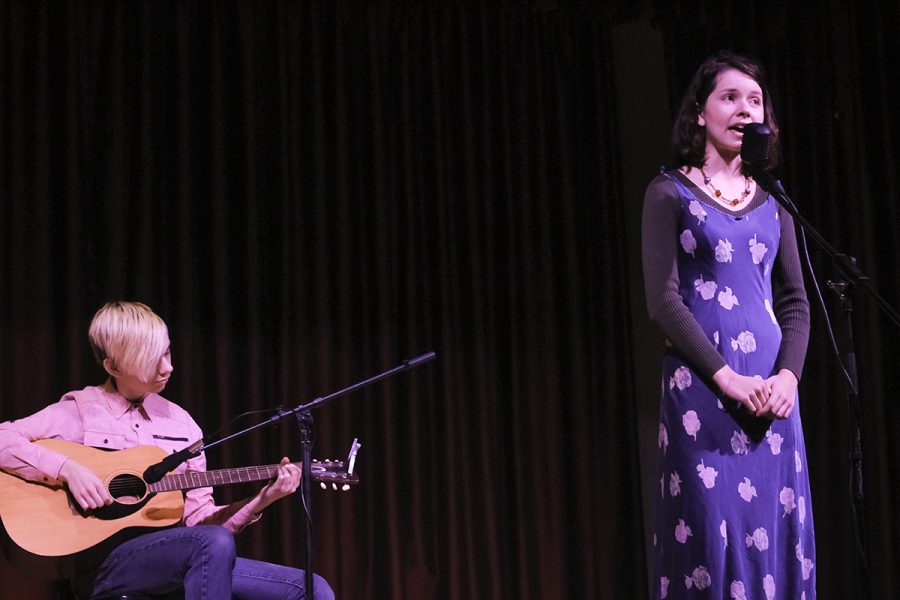 Chico local youth duo Snowing in May preforms an acoustic cover of the popular song "Take on Me" by a-Ha. Photo credit: Tara Killoran

If someone had to describe the “Vroom Vroom Variety Show” they would say “wonderfully weird.”

Chikoko, the same people who put on “Evoke-An Experimental” fashion show back in October, put on their annual variety show this past Friday at the Chico Women’s Club. The show showcased talent from all over the community.

Throughout the night, the show’s hosts, Nel Adams and Muir Huges, gave out raffle prizes, each donated by a local artist for the raffle. All raffle prize purchases are to be given as donations to the North Valley Community Foundation, who have been accepting donations for Camp Fire relief. The prizes ranged from paintings to handmade jewelry and even items that were featured on the runway at the Chikoko fashion show.

The night was jam-packed with many performers with weird yet fun talents, with everything from contortion to reverberated saxophone playing. The night started off with a Native American prayer by Veronica Saray. She “blessed” the room with her prayer, then played her own song.

The show had some unintentionally funny moments. As raffle tickets were being drawn, one name kept coming up. Conner M. made this moment stand out, with the fact that he didn’t just win once or twice, he won a total of five times. It became something of a joke with the audience members, as with every ticket drawn, the audience would shout “Conner M!”

Performer Mr. I, who has been a show regular, said that everyone should take the opportunity to play on stage and if that’s something anyone would like to do, you should “…stop wasting your time and just do it.”

The performance got more and more interesting as the night went on. At one point the host had one side of the room shout “queef” and the other “fart,” leading to the next performer performing “farting yoga.” It was clear that all one needs is to do yoga and have a fart track playing in the background, and the audience will be laughing in no time.

As the curtain came to a close, Muir Huges had some final words to say to the audience.

“If I could have a living room in Chico where people were invited to share their voice, their performance, their talent, it would be this,” Hughes said.

“I’m so appreciative to have everyone here with their talent. This is a really important time for us to really love each other. So anyone in this room, or as you go about your day, take the opportunity to say hello to somebody. I meet so many people I would have never meant if it wasn’t for this horrible disaster so I’m grateful for that and I’m grateful to all of you.

“I hope we can continue to be strong and make our community as good as it can be,” Hughes said.