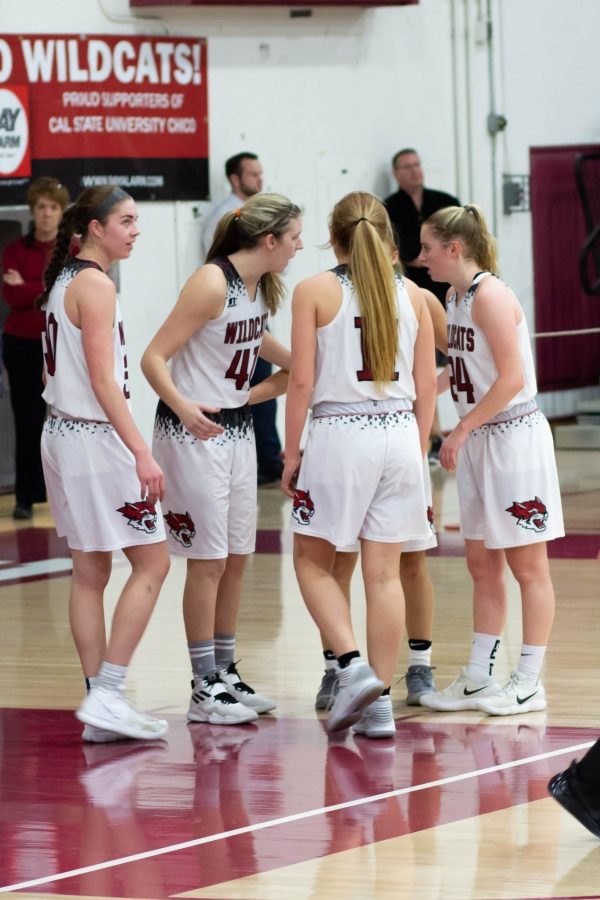 Chico State huddles up during a break in the action against Cal State East Bay in this archived photo. Photo credit: Maury Montalvo

Humboldt State fans had a lot to cheer about in their matchup with the Wildcats. After 36 minutes of play the Lumberjacks held a consistent lead, not giving it up once to the Wildcats. However, at this point it was also clear that the Wildcats wanted to send these fans home upset, and did so by saving their best basketball for the closing minutes in this game.

Chico struggled against Humboldt’s offense for most of the game. This changed, however, when the final quarter began. Chico State played lock-down defense, and held the Lumberjacks to just nine points.

“I was really just thinking about my teammates, we worked so hard to get that comeback, so I really wanted to reward their hard work and ability to stay composed,” Stark said about her game-winning free throws.

Rebounding was a big factor in this game as well, as the Wildcats out-rebounded the Lumberjacks, 47-34. This created a difference in second-chance points, since Chico State lead Humboldt 15-5 in that category.

This game has increased the Wildcats’ win streak to four, and they have now won their last four in-conference games. They are 4-1 in the California Collegiate Athletic Association, and have been looking great ever since their bad loss at UCSD. This win boosted them into fourth in their conference, ahead of the Lumberjacks who are now ranked fifth.

Looking forward for the Wildcats, there will be a two-week break before they play again. Then, they will put their four-game win streak on the line as they take on Cal Poly Pomona on the road, on Dec. 29.

With a 3-0 CCAA record, Cal Poly has been looking great. The Broncos are riding a six-game win streak, and will play one more game at San Marcos before taking on the Wildcats. Cal Poly and Chico have the same overall record, 7-1, proving that this should be a competitive, fun to watch game.