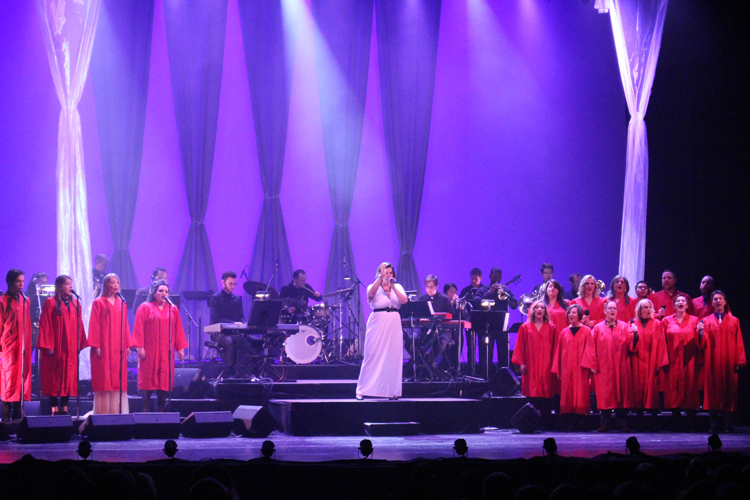 The sass of Madonna and the raw talent of Uncle Dad’s Art Collective joined forces for a fiery opening night. Filled with all of Madonna’s classic hits from “Material Girl” to “Like a Prayer,” musicians, vocalists and dancers collaborated beautifully to commemorate community art and ‘80s favorites.

The show debuted Thursday at 7:30 p.m. at Laxson Auditorium and two more performances took place on Friday and Saturday.

There was no shortage of musical expertise throughout the night. Ranging from blaring horn sections to smooth jazz bands, the set was constantly changing from one skillful ensemble to the next. Cover bands may not be too exciting, but Uncle Dad’s never failed to impress with powerful vocalists and remixes of popular Madonna tunes.

At one point, a full gospel choir was brought onto the stage for the final song of Act One. The classic “Like a Prayer” began slower than the original, with vocalist Samantha Francis building anticipation with her long and bluesy notes. When the beat finally dropped, so did the energy from the gospel choir and horn section as the song found its upbeat anthem. The crowd cheered as Francis nailed her vibrato and somehow kept up with her footwork as well.

The band and vocal talent were noteworthy, but the dancers stole the spotlight in many numbers. Some of the slower songs featured lyrical dance and ballet, its members twirling and bounding about with skirts that caught the air. The more energized sets highlighted tap-dancing and bright jazz numbers.

Samantha Francis and Ben Ruttenburg stole the scene with “Cherish”, performing the song as a duet and spinning each other around while still managing to maintain tune and rhythm. Audience members clapped and awed as the two shared an endearing kiss at the end of the song.

This evening of music and spirited performances brought the Chico community together. Many seemed to be supporters of Uncle Dad’s Art Collective and friends or family of performers, but Chico State students and faculty appeared to be in attendance along with town members.

Uncle Dad’s Art Collective is all about community, as they act as a collaboration between local dancers, vocalists, writers, directors, actors and artists. They are dedicated to fostering mixed arts within Chico and to allow a space for artists to explore their passions freely. The group has produced nine theatrical, musical and art events since being founded in 2013.

Keep an eye on their Facebook page and website for upcoming events and auditions for theatrical or musical shows.