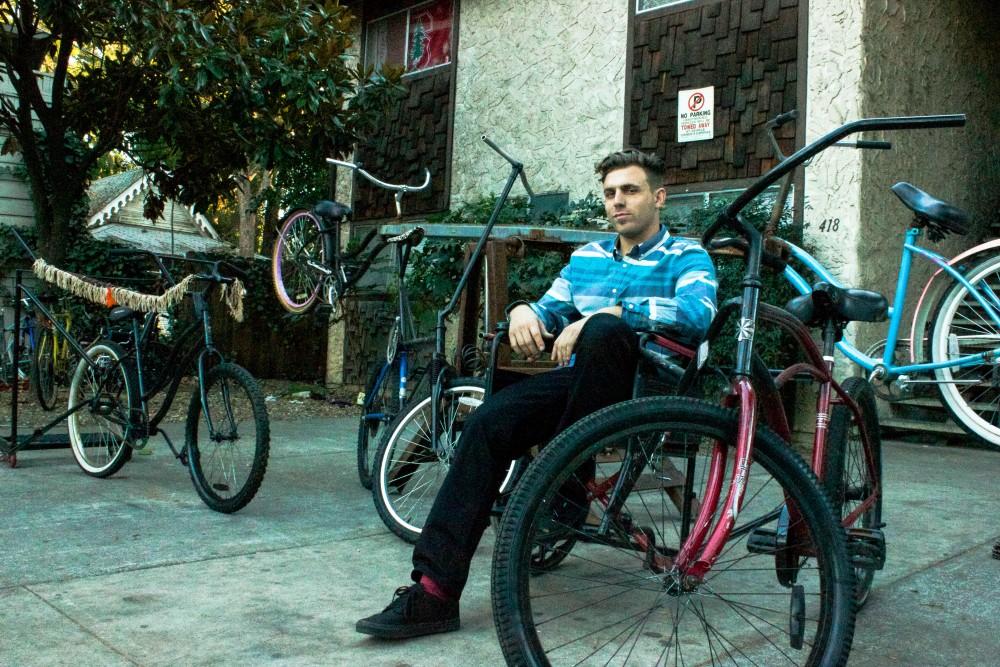 Travis Stock, senior art major, sitting in one of his many revolutionary bikes.Photo credit: Chelsea Jeffers

A teeter-totter, a 6-foot-tall bicycle, brightly painted Sony speakers and Chico State all have one thing in common: Travis Stock.

To say that Stock, a senior from Laguna Niguel majoring in art with an emphasis in art studio, is an artist of any one trade wouldn’t do him justice. Stock not only designs and welds bicycles, but also draws, sculpts, sings, acts, writes music and even does underwater photography.

“What inspires me is thinking outside the box,” Stock said. “I’m a daydreamer. Inspirations come from the smallest ideas, the things that I hear, I see, I dream.”

Some of Stock’s biggest pieces are the different bicycles he has designed since he got involved with welding after taking a sculpting class at Chico State.

“People are interested in bikes in Chico, y’know, just as much as I am,” Stock said. “And that’s kind of why I was attracted to it, mainly because of so much of the bike influence around Chico.”

Stock said he was inspired by kinetic sculpture and artists who have influenced movement of combining every day ordinary objects in order to make extraordinary objects and experiences.

The first piece that Stock designed was part of a Rube Goldberg machine he created for a beginning sculpture class. The teeter-totter is just like its traditional counterpart, except it has bicycles instead of seats.

“My friends think this one is the most fun,” Stock said. “But it’s kind of frightening when you’re six feet in the air.”

The Chariot, another bicycle Stock designed, has a platform in the back where one person can stand and hold on to extended handlebars that control the direction of the bicycle while another person pedals.

Stock’s favorite piece, a wheelchair sidecar bicycle, is a black and red Sun cruiser welded to a wheelchair of the same color, which functions and is situated like a classic sidecar. Stock said he built this bicycle to look nice and spent more time on it compared to others.

“I mean you might find a few on the Internet, but I don’t think any of them are quite like these ones,” Stock said. “It’s my artistic spin on it.”

Another bicycle that Stock designed, the Tall Bike, has a frame that Stock turned upside down and altered so that the handlebars sit 6 feet tall. The bicycle was made for a short film by Stock called “Strictly Business,” filmed and edited by Chico State alumnus Riley Mundia. The film also stars Stock’s other bicycles and is inspired by his journey through education.

Stock changed his major from pre-business administration to art his junior year. Stock realized that studio art was more challenging, he said. The normal, everyday work that he was doing in his economics and business classes was boring.

“I felt like these ideas that I had coming into this major that transformed me into where I am now is still like a growing, learning state,” Stock said. “It’s kind of exciting.”

Stock has become interested in writing music, he said. He sings, plays the guitar and piano, and uses iMaschine, a beat-making app. Stock was also recently cast in Chico State’s Music and Theatre Department spring 2014 production “Creation Stories.” It is his first role in a play.

As for his post-graduate plans, Stock said he wants to find a job where he can have the most fun and live up to his fullest potential. He has dreams of becoming an actor, artist, performer, community member and athlete.

“I’m not really settling on any options,” Stock said. “I’m not really gonna restrict myself to any. It’s like my art. I kind of like to do everything.”

You can check out more of Stock’s artwork on his website: http://ststock7.wix.com/stockart