Curless tosses a gem for the win against Simpson 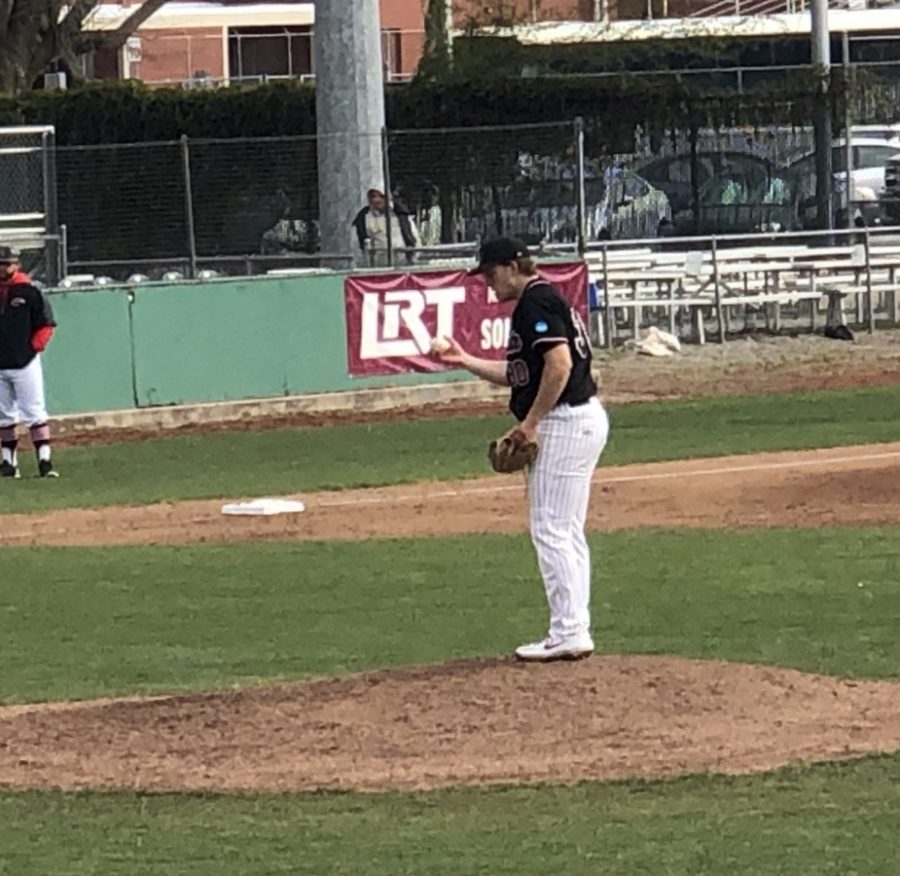 The first at-bat of the game was a double off Wildcats’ starting pitcher William Curless, the next at-bat a single and seemingly right after that a throwing error caused a runner to score– all before Curless record an out. This is how the Wildcats started their series finale against Simpson University Friday.

What proceded this rough start was Curless allowing only one hit to the next 19 batters he faced. Propelling the Wildcats to a 6-1 victory and a 2-1 series win over the Red Hawks.

“I just knew I needed to keep my head down, make my pitches,” Curless said about his shaky first inning. “I knew the defense behind me would definitely pick me up. I had faith in my guys behind me, for sure.”

Curless ended the day going six innings, he struck out five batters and allowed three hits. He has yet to allow a run in nine innings of work this season.

Single by Griffin Hennessy puts the Wildcats ahead! Scoring two runs with 2 outs in the 3rd inning. Runners are on 1st and 3rd. pic.twitter.com/qUfVn3QeH8

It was a pitchers duel through six frames, Chico State controlled the lead at 2-1 after a big two-RBI single by Griffin Hennessey in the second inning. Offense was hard to come by until Tyler Stofiel’s double lead off the sixth. Then Dustin Miller was hit by a pitch and pinch-hitter Myles Moran walked and loaded the bases.

Eddie Zavala was up next and hit a clutch single, that with two errors from the Red Hawks, turned into two runs. The innings scoring ended with a sacrifice fly by Alex DeVito.

Eddie Zavala with a single that is botched twice by the Simpson defense and allows three runners to score for Chico State. @theorion_sports #theorion pic.twitter.com/UaHW0CeAtG

“It felt great. I was just looking to drive something with two strikes,” Zavala said about his clutch single in the sixth inning. “Coaches thing is make it a tough at-bat with two strikes and that’s all I try to do. I was seeing the ball well today and I just tried to get things going for the boys.”

Chico State’s Eddie Zavala on his big hit in the fourth inning and on the teams win against Simpson. @theorion_sports #TheOrion #chicostatebaseball pic.twitter.com/ooo4iGjL3Y

After six dominant innings, Curless was pulled from the game and Andrew Lopez came in to relive him. Lopez proceeded to throw a scoreless seventh inning in relief.

Aside from a Brandon Hernandez triple in the seventh, both offenses were done for the day and neither team managed another run. Alex Kent came in for the eighth and Daniel Foret for the ninth, both threw hitless innings to wrap up the victory for the Wildcats and earning Curless the win.

Chico State is back in action Friday, Feb. 15, for a two-game series in Chico against Stanislaus State. First pitch is scheduled for 3:00 p.m. at Nettleton Stadium.