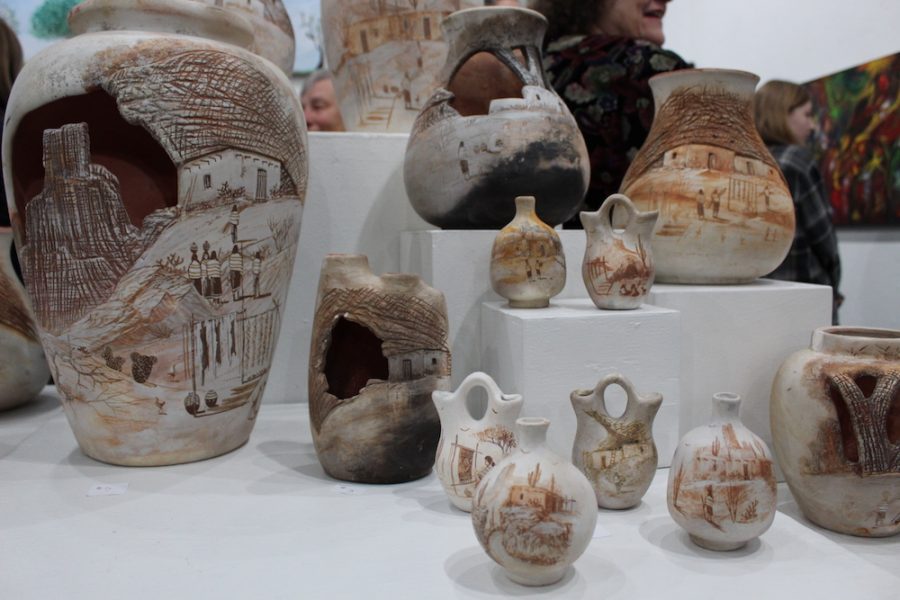 Vases of a deceased mother from Paradise.

“Art saves lives,” said local artist Jessie Mercer about the feeling of community at the opening reception for Chico Art Center’s new exhibition, “Renew, Rebuild, Reimagine.” The art shown in the exhibition is a response to the Camp Fire.

“The gallery is designed to give the community a safe place to share visually expressive acts of resilience,” said CAC Gallery Director Cameron Kelly.

The gallery showcased many objects, paintings, photographs and artifacts for the public to see. It was put together by the Chico Art Center in an effort to communicate the artists’ capacity to recover from one of the most devastating wildfires in history.

“This exhibition is an effort to offer hope and inspiration in the face of “the new normal,”  Kelly said.

Over 60 artists showcased their work. Many for the first time since the Campfire. Elisha Sheridan showcased her paper clay bust titled “Irene.” The bust represents three generations of women, as the bust caries facial features from both her mother, herself and her newborn daughter.

“I had photos of my mom and myself and then I had ultrasound pictures of her (Sheridan’s daughter) so I was trying to get different features like the shape of the lips, to be a combination. So the title of it is “Irene” and that’s all three of our middle names so it’s like a three-generation combo kind of thing,” Sheridan said.

“Irene” is the first sculpture Sheridan has ever made, and on top of that, she made it while she was pregnant which made all the more emotional to her.

The sculpture was at her mother’s home at the time the Camp Fire hit.

“I didn’t expect it to make it through the fire at all, so it was such a cool surprise when she (mother) went to look at her (home) to see if there was anything still standing. She saw that (sculpture) and it was very cool for all of us to see that thing that represents our family and the three of us together was still there and survived.”

Sheridan felt privileged to be one of the artists to represent what this fire means to all of the people affected.

“The images that you see here, or the memories that we have through something that made it through(the fire) is the tiniest sample of the emotion that is going into it. So I feel what you see in this room, it’s just a privilege to be one of the people here in the room showing off what it means to me,” Sheridan said.

“While I didn’t make it in response to the fire, it was really important to have it, just to have something that was ours before. I went from having a house that I needed to declutter to now it’s like we have a few things that made it through and that’s really cool and it’s even cooler that its something sentimental.”

Survivor Jessie Mercer shared a touching moment with fellow survivor Madame Henry that can only be described by two people who have experienced something as devastating as the campfire. Madam Henry placed her house key into Mercer’s art pieces after hearing about the intended purposes of her community project tribute. The project started Nov. 8 as Mercer invited survivors of the Campfire to donate their keys from their lost property. The goal is to create a sculpture of a Phoenix out of the 1,300 plus keys she has collected so far.

“I have keys from juveniles to the deceased. I received the keys today from heritage oaks which are some of the most heroic staff that helped humans up there. They were the last to get out with all of their elderly. They stayed and waited. Those staff are incredible.”

“I have an ATM key which makes me feel like a gangster. I picked metal from five counties personally. I just drove around until it felt right. Everything’s been donated, materials and I haven’t accepted a dime, I just do,” Mercer said.

The mission for the project is to combine the stories of those affected to create a renewed piece of art for all of Butte county to enjoy. Mercer’s hope is to have the project complete by July 2019.

These are just two of the 60 plus stories being told at the “Renew, Rebuild, Reimagine” art exhibition located at the Chico art center. The gallery runs from Feb.8 to March 1, 2019.