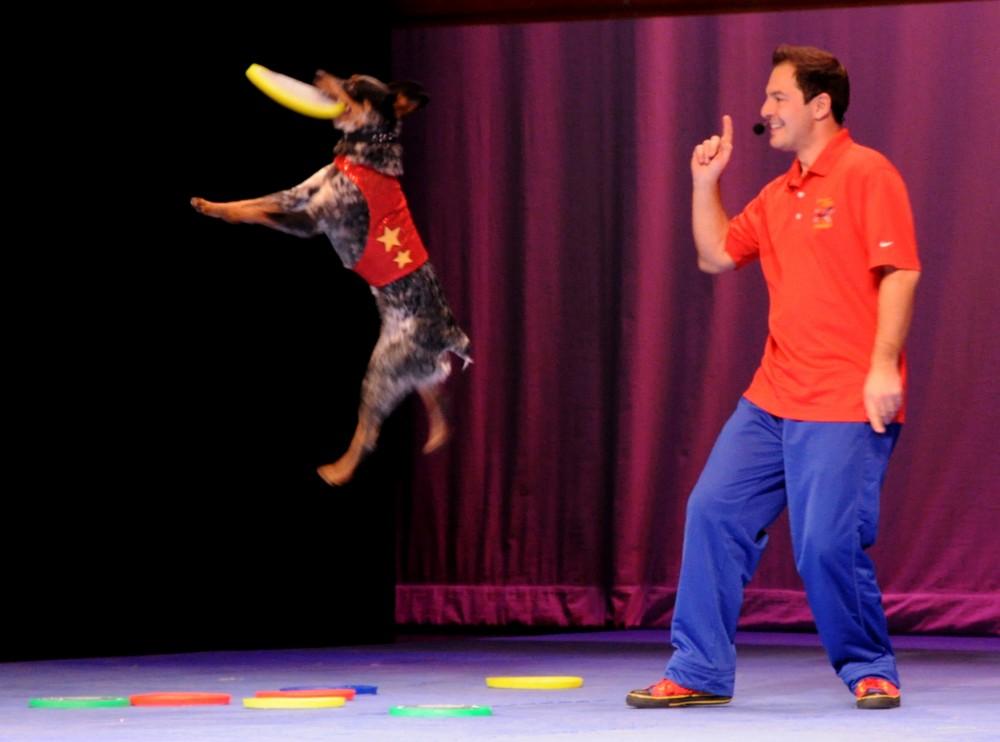 Adopted dogs from pounds across the nation do flips and tricks, such as Cooper the Australian cattle dog who can catch frisbees tossed by Chris Perondi in quick succession up to four feet off the ground.

Bouncing with excitement from his plush, red-velvet chair a boy remained restless until the lights went dim in Laxson Auditorium Tuesday evening. Wearing a red collared shirt and matching high-top Converse, Chris Perondi entered the stage and began his Stunt Dog Experience. “What kind of fun are we going to have?” Perondi asked the audience.”Dog-gone fun!” the crowd roared in reply.As Baha Men’s version of “Who Let the Dogs Out?” filled the auditorium, smiles of nostalgia appeared on the faces of patrons. And then they came. Tails wagging, tongues out and with a pep in their step Cooper the Australian cattle dog and Blazing Bentley the border collie bounced off Perondi’s thigh and caught a flying disc mid-air. Perondi said there would be six challenges to test the intelligence, speed, accuracy and leading ability of the K-9s.To get the audience more engaged he made it a competition by splitting the audience into two teams: the red team and the blue team. The dogs who performed were fashioned with a blue or red sequined vest to represent their team. The first and most memorable challenge was the high-jump. With a starting height of 36-inches, both teams cleared the bar with ease. As the bar rose, so did the anticipation. With the bar suddenly as tall as about half the audience, 60-inches high, both dogs cleared it to set a new record – right there at Chico State.”I’m still amazed about the jumping,”said Katrina Woodcox, Butte Humane Society’s director of development.The next act involved members from the audience.”Pick me! Pick me!” the premature voices called out over each other.Perondi told the four eager volunteers to get on all fours and squish together for an Evil Knievel-esque stunt. But don’t worry, Perondi had Diggy, the show’s mascot, take the end as a safety cushion. With the four kids and Diggy successfully cleared, it was time for something a little more elementary. Well, maybe if you were a human. Spitfire Spinelli, the cattle dog mix, could jump rope – on two feet! And her pal, Geronimo, who was also a cattle dog mix, could double dutch. “They can’t do anything like that,” 10-year-old Cameron Boyer said about his shitzu and puggle at home. As Diggy gave his best jump rope performance, Perondi joked, “He’s just learning the ropes.”Like an acrobat, a dog balanced on his two front legs in Perondi’s hand.As entertaining as they were to watch, it was even more astonishing what those dogs had achieved. All the dogs were rescued from shelters all across the country. In addition to being utterly amazed, Perondi aims to spread awareness about shelter animals. He reminded the audience to check out the shelters first when thinking of getting a new pet. Woodcox said that Perondi’s Stunt Dog Experience goes to show that old dogs really can learn new tricks. If anyone needs guidance with their adopted dog, Perondi has two training DVDs for sale. In addition to the training material, Perondi offered souvenirs like visors with floppy dog ears, glowing flying discs and a key chain that what?”It poops,” 9-year-old Lilly Vasquez said squeezing her new white dog key chain, as something rather brown appeared from the bottom region. Perondi crafted these genius key chains to remind pet owners to clean up after their animals. Emma Wood-Wright can be reached at [email protected] or theorion_news on Twitter.