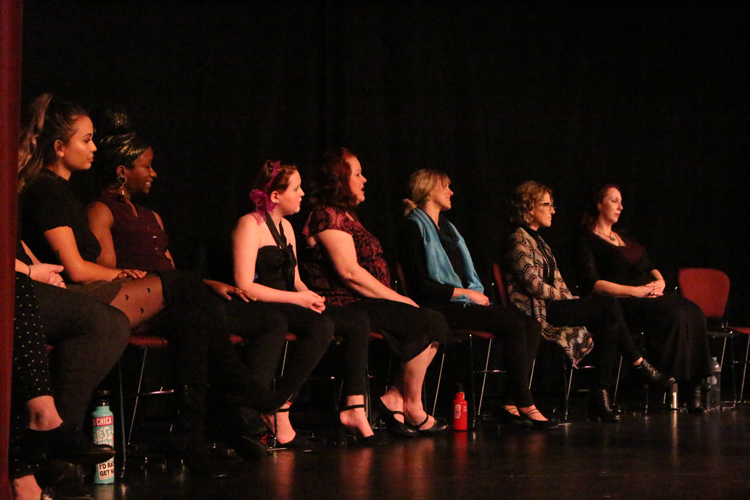 Cast Members of the Vigina Monologues sitting down while on stage. Photo credit: Rayanne Painter

There are few shows presented at Chico State that begin with cast members encouraging the audience to shout synonyms of “vagina” at the start of each performance.

The Gender and Sexuality Equity Coalition and local acting talent hosted their annual performance of Eve Ensler’s “The Vagina Monologues” on Friday and Saturday at the BMU auditorium. All show proceeds will benefit the non-profit Rape Crisis Intervention, Catalyst Domestic Violence Services and GSEC.

An empowering play for all genders and ages, the Monologues bring awareness to the experiences of being a woman and having a female body. Topics ranged from tales of sexual self-exploration and self-discovery to the heartbreaking realities of sexual assault and genital mutilation faced by millions of women.

One of the acts, embodied by Alyssa Larson, portrayed the experience of a sex worker discovering her passion for helping women experience sexual pleasure. Larson was literally the climax of the play as she vocalized different types of moans women have during orgasms.

“My favorite was the one where the woman moaned,” said Angela Stieber, an audience member and former GSEC intern. “She did a good job embodying and normalizing each and every diverse type of female moan.”

“The Vagina Monologues” initially made its debut in the 1990s, but the issues the play flirts with are still relevant today. The play also collaborates with and benefits V-Day, a movement that strives to end violence against women and girls. Each year, GSEC’s version of the Monologues adopts a theme to highlight a connecting V-Day topic.

This year, the Chico State chapter of Students for Quality Education took on the last monologue of the show called “Spotlight.” SQE Representatives Elybeth Sofia Alcantar and Alejandro Alfaro Ramirez read poetry penned by incarcerated women and statistics on the rise of violence against women, people of color and people in the queer community in prison and immigration systems.

“We decided to share this information with you all today because this is a systemic issue－institutional issue, and to many of us it is a deeply personal issue,” said Alcantar. “We are here to talk about how geographically and socially, the incarcerated state does not end at the borders of a jail, a prison or an immigration detention center. The incarcerated system is a violently capitalistic one whose tentacles extend to our schools, our communities and our families.”

A tabling fair was also present at the performance. Resources and representatives from all the beneficiaries were present, along with local artists selling clay pins and magnets shaped as vulvas and underwear decorated with uterus drawings.