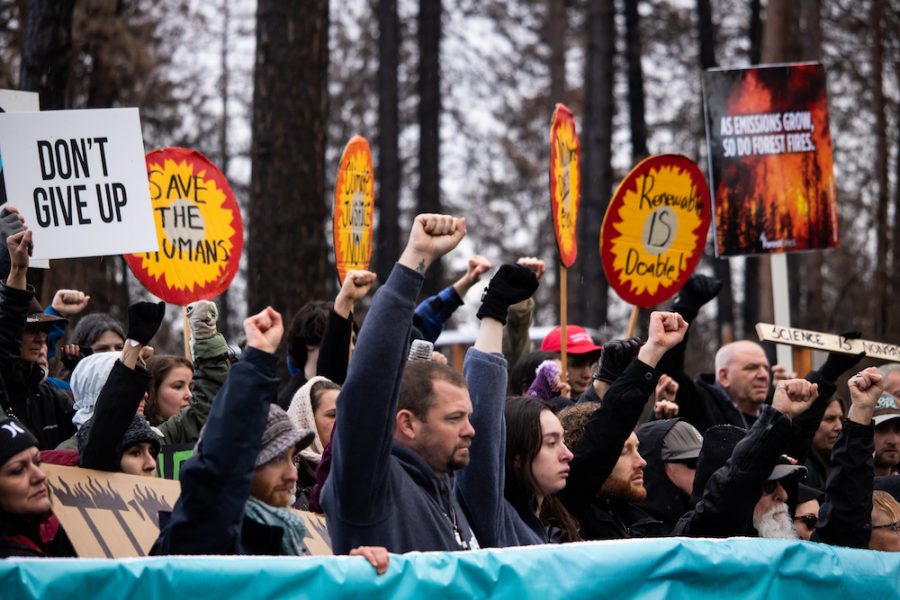 Stephen Murray stands at the center of the banner with Camp Fire survivors raising their fists in unity to symbolize a #ClimateUprising, Sunday, Feb. 17, 2019, in Paradise, CA. Murray lost both his home and job in the blaze. Photo credit: Christian Solis

A camera stabilized on a 30-foot crane captured a crowd standing in snow and hail, holding up a #ClimateUprising banner as a call-to-action to find solutions for the changing climate. Followed by the banner, participants spelled out “#ClimateUprising” by lying on the ground of the driveway into the mobile home park.

#ClimateUprising is a movement calling for bipartisan action to bring more awareness to people affected by climate change. Inspired by those impacted by the Camp Fire in November 2018, Los Angeles filmmaker Nirvan Mullick helped send four Camp Fire survivors and a couple of community leaders to Washington D.C. for the National Town Hall on climate change on Dec. 3, 2018. It was there the movement began to take shape.

“We started this to create a platform for the community to have the microphone because the world needs to hear their stories,” Mullick said. “There is no shortage of powerful stories in this community.”

Before the group photo was taken, participants were treated to a performance of a song written by Camp Fire survivor, John-Michael Sun. Sun wrote his song “Refugees” a week after the Camp Fire while he was living at his friend’s house in Chico.

Mullick addressed the crowd waiting for the portrait, noting the dangers posed by climate change and the concerns of those it will affect the most, living in areas that are already prone to natural disasters.

“The last five years have been the hottest years in human history. Insects are dying off. Coral reefs are dying off,” Mullick said.

He also mentioned the Butte County housing crisis as an example of an area for concern.

“This (Camp Fire) affected 52,000 people, not to mention all the students who are going to have a hard time finding homes for housing next year,” he said.

Mullick’s words made a global issue seem more personal for those living in the Butte County area. Karl Ory, former Chico mayor and a current city council member, joined the people of Paradise at the event for that very reason. Ory hopes that those who didn’t give much thought to our climate before the Camp Fire now have a better understanding of how deadly the effects can be and how it can impact a community.

“The reason I’m here is that I see climate change as a public safety issue,” Ory said. “I’m here to stand with the people of Paradise and Chico for more aggressive action, both locally and nationally.”

The event was spread to the public through a Facebook event flyer called “500+ Person Group Portrait in Paradise for #ClimateUprising.” The number was later changed to “1000+” as more signed up, though it didn’t quite reach the higher number. Mullick was happy with the number of people that showed despite the weather conditions.

Mullick said he is very excited about what the future holds in terms of sending #ClimateUprising’s message to the world, and how he believes today’s youth are going to help.

“I feel that Paradise can be to climate change what Parkland was to gun reform,” Mullick said. He mentioned a few Chico State students at the event who are planning to help start a climate strike on campus in March.

“We want our leaders to work together and come up with solutions that will address this on the scale that it needs to be addressed to protect our world and our future.”

Both the group portrait and aerial image will be available soon on the #ClimateUprising website.

Trenton Taylor can be reached at [email protected] or @trent_taylor34 on Twitter.