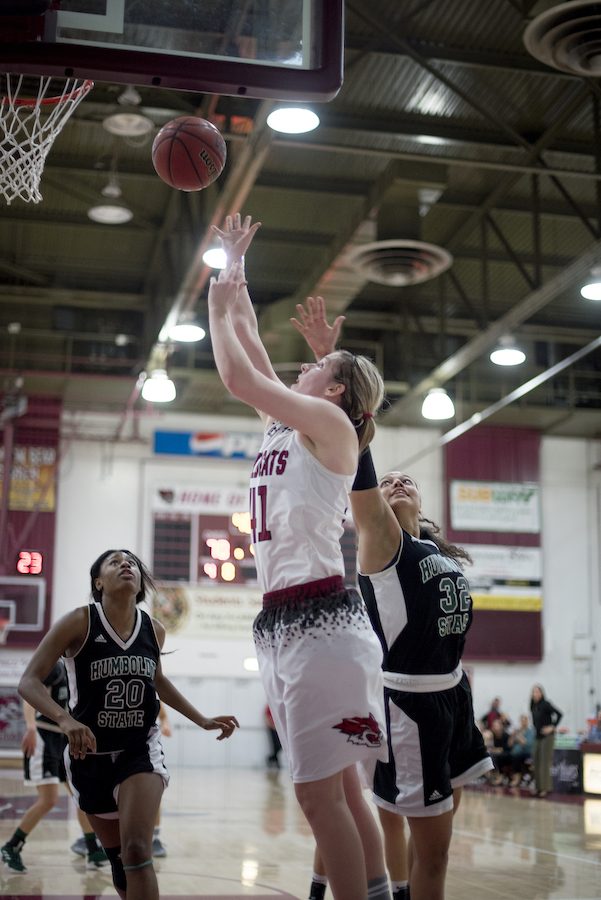 Chico State women’s basketball lost their fifth straight game, by only one point in Thursday nights game at Cal State Los Angeles, with the largest lead being only six points.

The game came down to the final play. The Wildcats were down 49-52 with just over a minute to play when McKena Barker got an offensive rebound and put it back up and in for a layup. This made the score 51-52.

Then Madison Wong got a steal off an inbound pass by the Golden Eagles and the Wildcats took a timeout with nine seconds to go. The Wildcats inbounded the ball and Natalie Valenzuela missed a layup that could have given the Wildcats the lead in the final four seconds.

“I think there were many opportunities to win tonight,” guard Shay Stark said. “I don’t think it came down to any one play.”

Chico State could not execute when they needed to throughout the game as they shot 20 percent from the free throw line and had 11 turnovers.

“Over the course of the game we just didn’t shoot the ball well, we gave up a lot of touch-fouls and our rebounding lacked as well,” Stark said.

The Golden Eagles out-rebounded the Wildcats 39-31 and guard Vanessa Holland committed her fourth foul early in the third quarter causing her to sit the majority of the second half. Holland was on the court for only 21 minutes.

Barker was the leading scorer for the Wildcats with 11 points. Barker also added eight rebounds and two assists to her stat line.

“I was just trying to keep my mind in the game and let the ball come to me and not force anything,” Barker said. “I think we had good offensive energy, just needed to bring that energy on defense.”

Although the energy was not there, the Wildcats held the Golden Eagles silent from behind the three-point line, they finished 0-7.

“We fought hard and had good team energy tonight and that is what we need to focus on for Saturday to get a big road win this weekend,” Barker said. “This season still has some momentum and we just need to keep pushing.”

The Wildcats square off Saturday night at 5:30 p.m. at Cal State Dominguez Hills. The game preview can be read here.