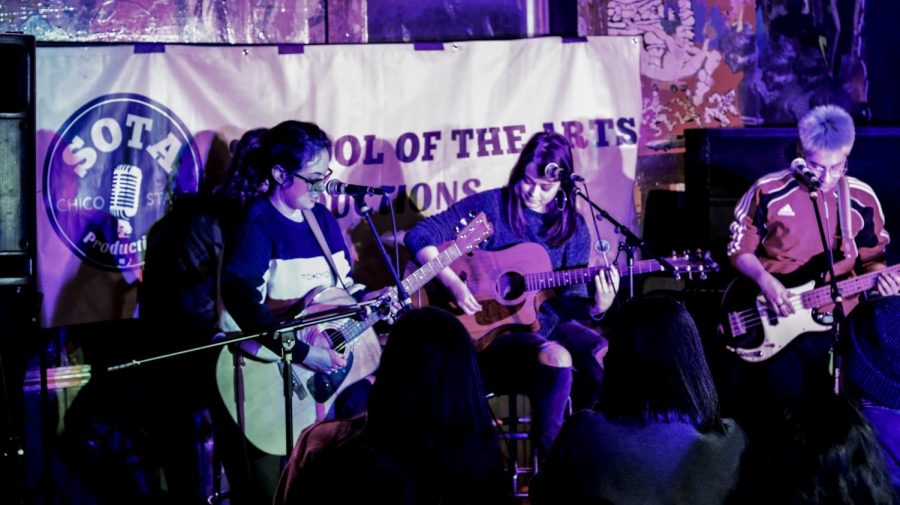 Madison Bear Garden was filled with an adoring crowd and acoustic music as Chico State’s School of the Arts (SOTA) hosted “Chico Unplugged,” an acoustic competition that spans over the course of three nights at Madison Bear Garden. Musicians perform acoustic renditions of songs they’ve written and a single winner is chosen from each of the first two nights. The winners and runners-up get the opportunity to perform on the final night in the Winner’s Showcase. Along with performing in the showcase, the winners get the opportunity to record their original songs at Chico State’s recording studio.

“These recordings will be mixed and recorded by the recording arts studio here at Chico State and then they will be released to the artist to do with as they please. So you’ll probably see them popping up after they’ve been mixed in the next few months on our page, Chico State SOTA Productions. You can find us on Facebook and on Instagram,” Natalie Almond said.

Singer-songwriter Caloy won first place during the second night of Chico Unplugged. Caloy involved the crowd in a sing-along as he performed an acoustic rendition of “Hey What’s Up” by 4 Non-Blondes, which Caloy calls an “anthem of a song.” Caloy has been performing at SOTA-run events since he first arrived at Chico State in 2016.

“It feels great. Sometimes it kind of sucks that it’s a competition just because you meet so many musicians through these, but winning is nice. It makes me feel like I’m doing the right thing,” Caloy said.

The winner of the first night, 5 Mile Myth, which consists of band members Jayna Feldman, Erik Trignani, Sofia Maldonado and Kailo Castilla, felt good about performing in front of an intimate crowd.

“The crowd was so respectful, they were so quiet. It was nice to play for a crowd that actually cares about what we play cause we play out of the ordinary music, I’d say, for Chico,” Maldonado said.

”The first one was a cover of “Don’t Let Me Down” by The Beatles. That’s one that definitely gets the crowd involved and a little bit excited,” Castilla said.

“So we write songs individually. We haven’t written a song together as a band yet, so we just bring our own songs,” Maldonado said.

SOTA Productions has a wide variety of shows coming up, including the next Sofar Sounds show on March 10. The show’s location is a secret until the day of the event. SOTA will also be hosting a music industry networking event on March 13 featuring Insomniac, the largest electronic music company. For more information on these events, visit Chico State SOTA Productions Facebook page.