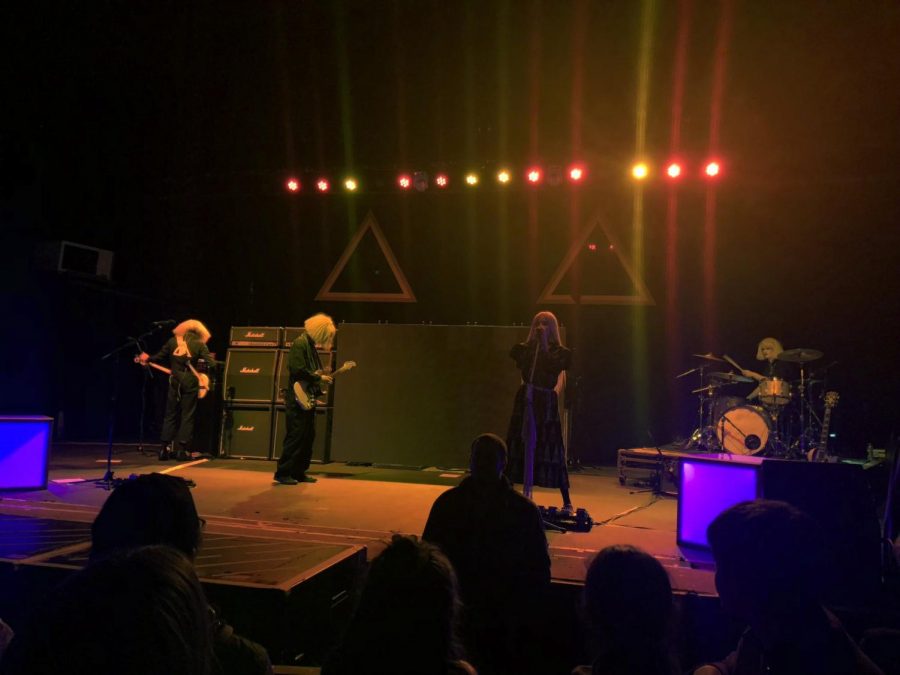 Musician and YouTuber Poppy performs her strange tunes to a small venue in the Senator Theatre. Photo credit: Rachael Bayuk

Poppy has a history of presenting the strange and unusual. Her stage presence does not disappoint in that regard. She floats on and off the stage like a figment of the imagination. Her set felt more like a satire of a performance than a real show.

I wanted to love this show, but I would be lying if I said I did.

The opening singer, AViVA, was a delight. Though her music was heavy, her stage presence was refreshing and captivating. She took command of the stage like a true professional. She mesmerized me despite the fact that I couldn’t understand most of her vocals over the instrumentals.

She said the inspiration for the music she creates is “the outsider experience.”

AViVA took me on a journey back to my schoolhouse days, the feeling of me against the world. That part of me is represented ‘to a T’ in her music. During the performance of her popular song “GRRLS,” AViVA had people moving along to the beat.

Poppy, however, allowed her band to hold the show together. For most of the set, the bassist was far more interesting than her. She had a lame stage presence that left me wanting for something more, though I wasn’t sure what.

She sparkled then burned out before reaching a full glimmer. As a person who loves the weird and wacky side of life, I was holding my breath waiting for the classic Poppy strangeness, but it never showed its face.

After asking the crowd if they trusted her, she passed out some “poppy punch.” A play on “drinking the punch.” Her merchandise features the slogan “not a cult,” a reference to her fan base and the criticism her unique work receives.

Although her fans could seem like a cult from the outside, questions of their leader were still present.

While working my way through the line and then eventually into the venue, I heard excited chatter about Poppy and what she would hopefully perform. But afterward, I overheard conversations questioning song choices among other critiques of the show.

While her fans seemed very satisfied with the two-song encore (the ends of shows are always the most exciting) it felt less than spectacular. Similarly, she left the stage at one point during the set to show the music video for Voicemail. This felt lazy and poorly planned liked the rest of the short set.

Despite all this, Poppy is a strange, once in a lifetime experience. I would suggest everyone go see her at some point in her career. Whether you drink the Poppy punch or not, her shows are intriguing and intimate.

Rachael Bayuk can be reached at [email protected] or @BayukRachael on Twitter.