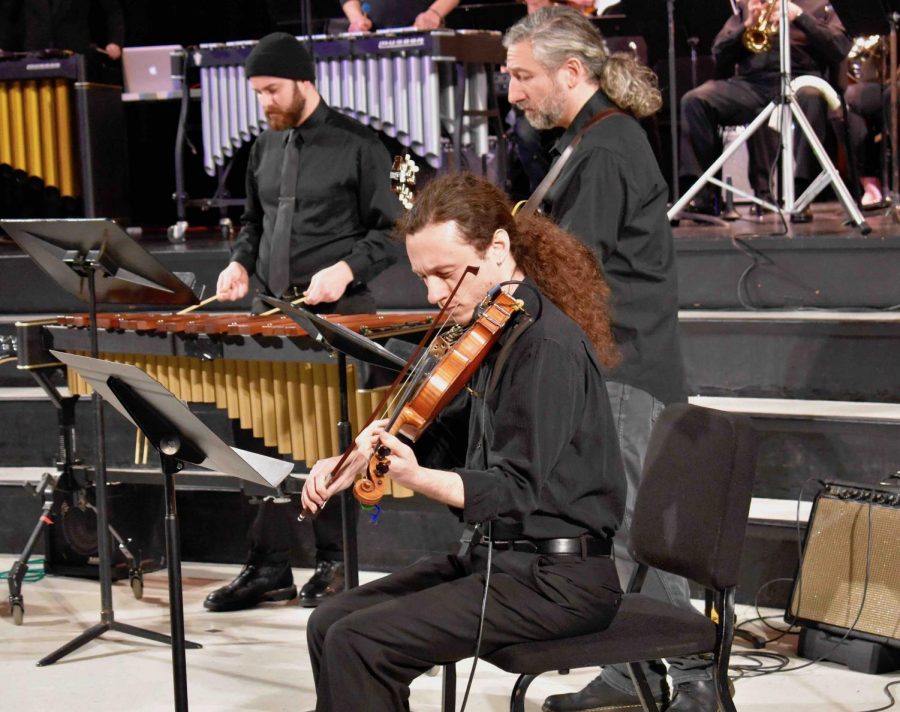 Ever read “choose your own adventure” books as a child? Chico State’s New Music Symposium recreated just that, but with music and rhythm.

Guest composer Terry Riley joined the audience at the Rowland-Taylor Recital Hall on Thursday evening to watch the musicians recreate his masterpiece “In C.” Headlining a musical genre known as “minimal music,” Riley’s piece was written to withstand infinite musical interpretations throughout the 53 phrases noted on the score.

Depending on the group that learns it, each phrase may be repeated any amount of times and players are encouraged to play at their own free will. This ensures that the melodic content remains predetermined, but some of the piece is left up to chance.

“Every performance is different,” said Riley. “This one was unique because they have such a large ensemble and a powerful effect.”

“In C” is curated around a constant central beat, the note C in eighth notes, that is traditionally played by the piano. In New Music Symposium’s rendition, this part was replaced with a xylophone player who stood front and center.

The rest of the musicians represented a full band, plus some. This includes the basic band ensemble such as woodwinds and brass, to more obscure additions like synthesizers, electric guitars and electric bass.

Riley composed “In C” in 1964, which has been hailed as one of the most important musical works of the twentieth century, influencing other composers of the time and also rock groups like The Who, according to a press release by Chico State’s School of the Arts (SOTA).

“I used to play piano in a bar,” said Riley. “One day, I was riding a bus in San Francisco, going to the bar to play, and I heard this piece in my head. After I played, I went home and wrote it down.”

Riley was joined by Grammy-award winning pianist Gloria Cheng on Friday to discuss his works as a composer and pianist. The two also performed Riley’s piano works at a concert at Zingg Recital Hall on Saturday night.