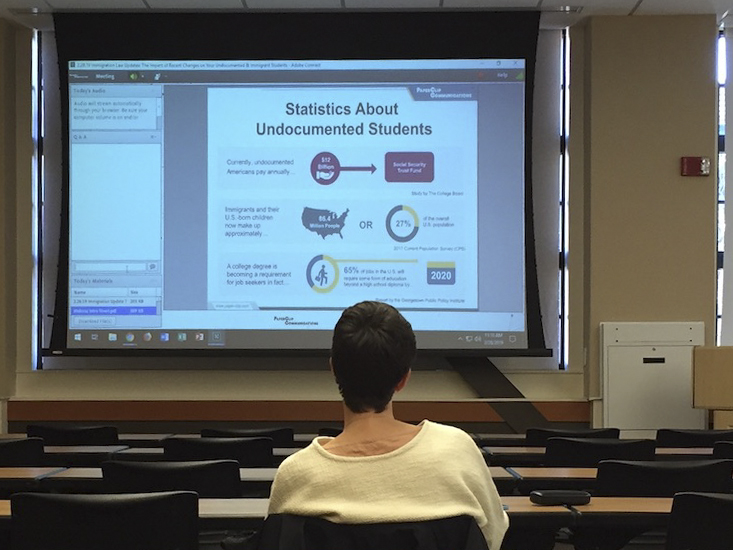 The Dream Center participated in a webinar updating campuses on where the Dream Act stands. Photo credit: Nate Rettinger

Currently, there are 18 states that have passed the Dream Act with California being one of the first to adopt the law. Federally the law has failed to pass, but is being fought against in many court cases such as Brewer v Arizona.

Stephanie Delia, the managing attorney of Citizenship Now!, spoke on the impact of the Dream Act, saying that when introduced in 2017 it was estimated that 2.1 million students qualified for the benefits of the law.

Teresita Curiel the director of the Dream Center, spoke on services to help relieve financial pressure for undocumented students in the Dream Center. The Dream Center offers suggestions on where to get legal advise and offers safe spaces for all students.Explain what services she spoke about” class=”inline-comment collapsed”>

Public charge policy is a new action that is currently being used to deport undocumented students. When undocumented people become heavily dependent on government programs, they are subject to review and possible deportation.

Curiel warned audience members to be wary of requests to come to court to talk about government aid programs such as Medicaid or food stamps because of recent deportations resulting from similar instances. Curiel spoke of some anecdotes of kids appearing in court thinking they were signing legal papers when in reality they were being deported.

Curiel also spoke on resources that could become available in the near future.

The presentation ended with Curiel telling audience members to refer undocumented students that were having any trouble at all to the Dream Center on campus.

Nate can be reached at [email protected] or on Twitter @NRettinger19.