Nor Cal Roller Girls skate into a hopeful season 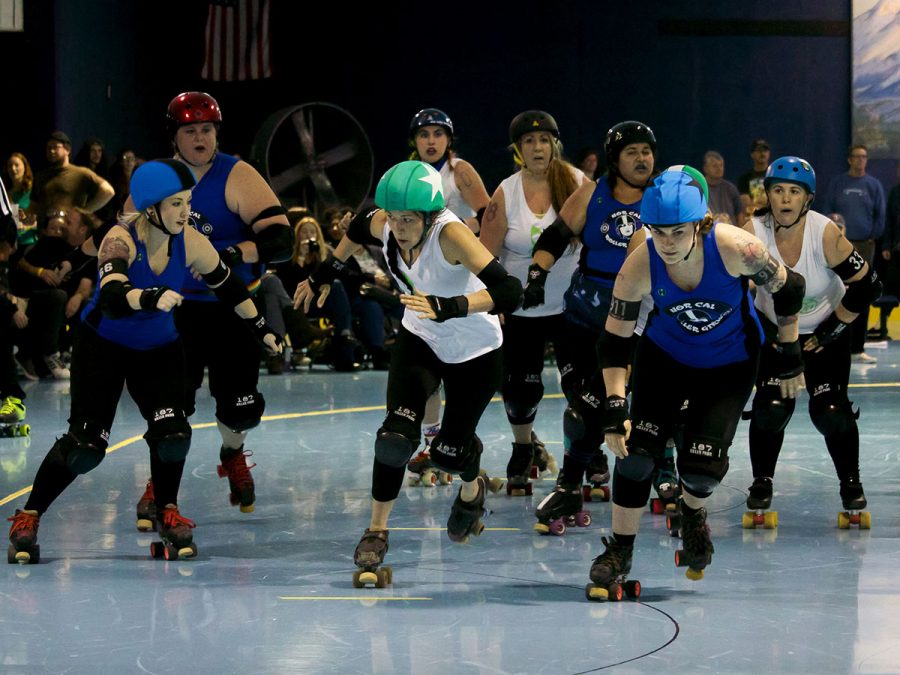 Jess Jarocki or “Tripsy McStumble” races against the Sacramento Flood Water jammer as they both hurry to pass one another to earn more points during the match. Michaella King or “Rebel Rose” is the pivot and dictates the pace of the jam match. She gets ready to slam into the Flood Water opponent so Jarocki can pull ahead. Photo credit: Olyvia Simpson

Nor Cal Roller Derby Girls raced off into their 2019 season opener on Saturday night at Chico’s Cal Skate.

The team faced off against Sacramento’s Floodwaters, both teams head-to-head until halftime, where Nor Cal took the lead 89-48. Nor Cal’s winning streak continued as the girls pushed forward into their win of 168-97.

Roller Derby has been around since the 1930s but how the sport is played isn’t common knowledge.

The game begins with two teams of five players skating on a circular track. Each team has a “jammer,” who wears a star on their helmet, and four “blockers.” The jammers, the only players able to score points, try to break through the group of blockers from the opposing team in order to complete a lap. With every blocker that a jammer passes from the opposing team, the team scores a point.

Team members aren’t called by their regular names during derby games. Each player has a chance to name themselves based on their roller derby skills or any other unique aspect or wordplay they choose. Some names from Nor Cal’s team are: “Tripsy McStumble,” “Smother Theresa” and “Tempest’s Fury.”

The sport is contact heavy, with women slamming into other players and falling off the track. Each player is required to wear protective equipment such as a mouth guard, helmet, elbow pads, knee pads and wrist guards.

Saturday’s gameplay was intense, but the competition was friendly. Opposing team members seemed to know each other and gathered after the game to grant each other post-game awards.

“We all work every day and have to practice late night, so we only have an hour of practice and we use the time really fast,” Nor Cal team member Riley Erickson, or also known on the derby track as “Mother Russia” and #AK47, said. “It’s a lot of just reviewing previous games on what we did right and what we did wrong.”

Erickson said that Nor Cal Roller Derby Girls recently became Women’s Flat Track Derby Association (WFTDA) sanctioned, which means they are recognized as a team nationally. They are one of 400 teams on six continents.

“We just had a game that we unfortunately just lost in Nevada, it was a super fun game and all the ladies over there were super nice,” Erickson said. “But this was our first loss of the season because we just started.”

For updates on future Nor Cal Roller Derby Girls games or events, check out their Facebook page.