The race for the A.S. student body begins 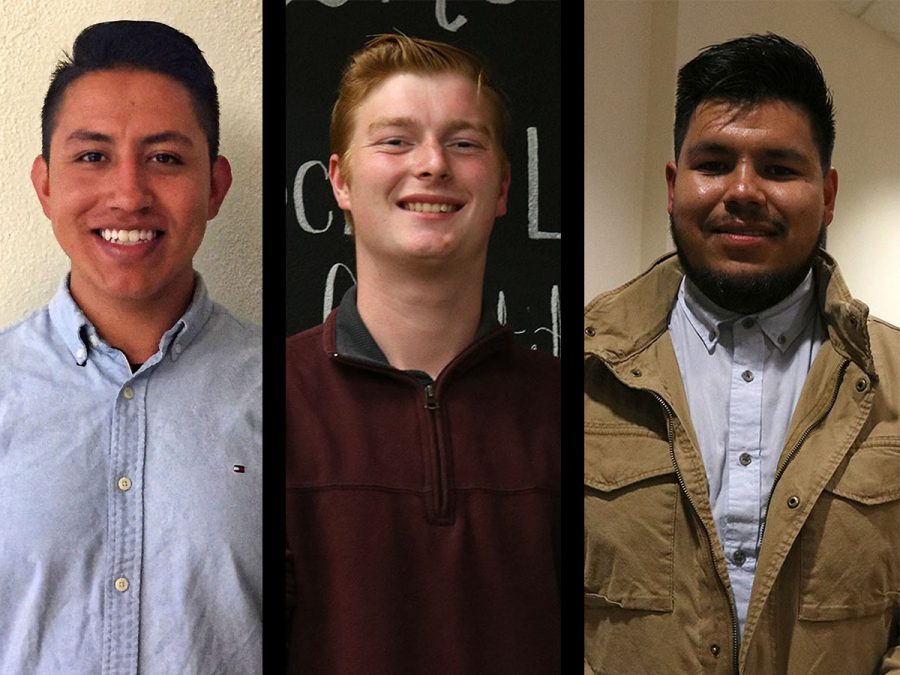 Three of the candidates in the running for the Associated Students body are Alfonso Caldera, Harry Hatch and Gustavo Martir. All three were present at Tuesday night's race highlighting event. Photo credit: Olyvia Simpson & Nate Rettinger

The official race for Associated Student body positions began Tuesday evening after a presentation was given outlining the rules of campaigning for the next week.

Alfonso Caldera is a candidate running for A.S. president. Caldera is a businessman and first-generation student who started his own company, Bright Horizon, which offers construction and landscaping services.

Caldera said his campaign will be focused on helping open doors for disadvantaged students and appreciating the diversity that Chico State’s campus offers.

“I want to focus on creating more opportunity for the students and celebrate diversity,” Caldera said. “I want to celebrate what they (different diversity groups) have to offer.”

Gustavo Martir is another A.S. candidate running for the president. Martir is a graduate student and is working about 20 hours a week on top of running in the election.

Matir said he wanted to focus on making the campus a safe place for everyone and making Chico State a community people want to become a part of.

“The purpose of our campaign is to make sure Chico State students feel like this is our home,” Martir said. “At the end of the day, it’s about us trailblazing a new path and turning around and reaching our hand out to the next generation.”

Harry Hatch is running for the senator position for the College of Behavioral and Social Sciences. Hatch said that he is already working on a seven-point plan and said it revolved around his campaign’s core values. Hatch defines these values as “the three C’s”: communication, collaboration and cooperation.

Hatch spoke on his personal experience and how it seemed like senators never communicated with the people they were supposed to be representing. Hatch wants to change that.

“You’d be voting for a candidate who is undeniably passionate about representing the students and making sure their voices are heard.” Hatch said. “I would try to communicate with our over 4,000 students to basically let them know what’s going on because we are representing them and to bring the power back to them could bring the campus and the community back together.”

Nate Rettinger can be reached at [email protected] or on Twitter @NRettinger19.