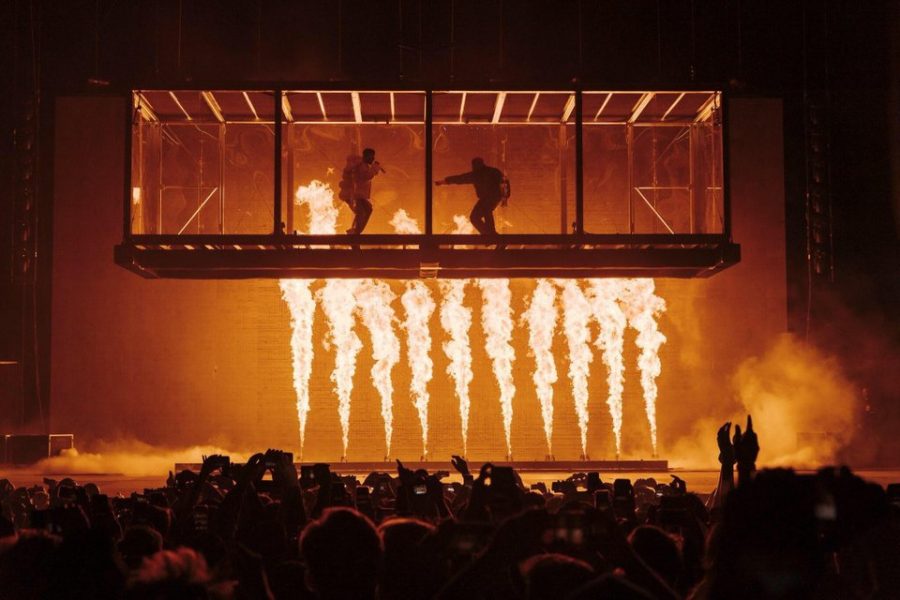 For my playlist, I decided to choose songs that have been in my constant rotation for years and have some significance in my life, one way or another.

Kanye West is one of my favorite artists of all time. The man has proven time and time again that he is not only one of the greatest rappers and producers of all time, but also one of the greatest artists of all time. In his 2016 album “The Life of Pablo,” we see an emotionally vulnerable Kanye that has not been seen before. One of the more intimate moments of the album is the song, “Real Friends,” where Kanye expresses how his fame and his marriage to Kim Kardashian West have affected his friendships and his relationships with some of his relatives.

This song really resonates with me because it reminds me of all the friends I’ve lost over the last couple of years. Sometimes, it’s because of personal differences but most of the time it’s because as I grow older and get my life together, others are doing the same and finding time to meet and catch up is hard. It’s sad drifting away from those we were once close to, but it’s a reality we all must face.

When my grandmother passed away in the summer, I was devastated. I found it hard to find the motivation to continue school or pursue my hobbies and interests. I almost fell into a deep depression. That is until Travis Scott released his third studio album, “Astroworld,” a few weeks following my grandmother’s passing. “Astroworld” reignited my interests in music, film and life, in general. Following the release of “Astroworld,” I bought tickets for his Astroworld Tour the moment tickets went on sale. I believe Travis Scott’s music saved me.

“Stop Trying to be God” is one of my favorite tracks of “Afterworld.” With Travis’ smooth vocal delivery, stellar production and James Blake’s closing verse, Travis Scott has shown he is a master at psychedelic rap.

My junior year of high school was a tough one. The idea of having to apply to colleges soon as well as struggling to pass AP and Honors classes brought on a lot of stress for me. “No Surprise” helped me cope with a lot of the anxiety I was feeling at the time and helped me discover the rest of their discography.

I have become a huge fan of Radiohead since then, and I had the opportunity to see them live at Outside Lands Music & Arts Festival in 2016.

Arctic Monkeys is one of my favorite bands of all time. I have seen the group live twice: at the Staples Center in Los Angeles in 2014, and at the Bill Graham Civic Auditorium in San Francisco in 2018. I’ve been following the band for the past seven years, collecting all their albums on CD and vinyl, and have listened to their entire discography hundreds of times. “Cornerstone” is my favorite song by them because it’s one of their most sentimental songs, lyrically and instrumentally, and I have many fond memories associated with it.

In high school, I was a part of an a capella choir, and in my senior year for the spring concert, I sang “Cornerstone,” since it was going to be my final high school concert. One of my favorite memories leading up to the concert was rehearsing the song with one of my music instructors, Jan Ferrin. At the time I was unaware of it, but by helping me rehearse Ferrin was instilling self-confidence in me while boosting my self-esteem, both as an artist and as a person. This has helped me later in my adult life. Mr. Ferrin is one of the best men I’ve had the privilege to know. Rest in Peace, Jan. I miss you.

PINK FLOYD – “WISH YOU WERE HERE”

Pink Floyd is a staple in modern music. With classics like “The Wall,” “Dark Side of The Moon” and “Animals,” it’s clear why many consider Pink Floyd to be one of the greatest bands of all time.

“Wish You Were Here,” from their 1975 album of the same name, is my favorite. Serving as a tribute to their former bandmate, Syd Barrett, who was suffering from mental illness at the time, I love this song for its beautiful lyrics and captivating instrumentals.

Kendrick Lamar is arguably the best rapper alive and possibly one of the best rappers of all time. With albums like “To Pimp a Butterfly” and “Good Kid, M.A.A.D City,” his top-tier poetic lyricism gives listeners social insight by embedding themes of the issues revolving of marginalized communities into his music.

“Money Trees” is just one example of Kendrick’s ability to tell a cohesive narrative, depicting what life was like in Compton for him on top of a well-produced sample. This song made me a Kendrick Lamar fan, and I’ve been honored to see him perform twice. The man is truly a modern-day-Shakespeare.

I realize these last six songs were a bit of an emotional drag, so for the last four songs, I decided to add some more upbeat songs to serve a palette cleanser.

Never before had I been as excited about an up-and-coming group as I was with BROCKHAMPTON. With the rap scene saturated with the same recurring themes of drugs, alcohol, sex and violence, BROCKHAMPTON was a breath of fresh air. A lot of their music deals with themes of femininity, homosexuality and challenging societal norms of masculinity, among many others. Though most of their music is hip-hop, BROCKHAMPTON is much more than a rap group. This artistic powerhouse has six vocalists, six producers and a handful of web and graphic designers, videographers and a photographer.

“GUMMY,” in my opinion, best captures the essence of BROCKHAMPTON’s creativeness and artistry.

Yes, this is technically another Kanye West song, but this one comes from his collaborative album with rapper Kid Cudi, entitled “KIDS SEE GHOSTS.” Both Cudi and Kanye reflect on their experiences with drug addiction, overcoming depression and finding happiness in life. This album also features some of Kanye’s best production to date.

“4th Dimension” has been in my constant rotation ever since it dropped last summer and has become one of my favorite tracks of all time. Only Kanye West can sample a 1940s Christmas song and turn it into a banger.

Being from the Bay Area, myself, I can’t in good conscience create a playlist without acknowledging East Bay punk legends, Green Day. This band paved the way for punk rock to break into the mainstream from its place as an underground movement. Green Day’s music was essentially the soundtrack of my life during my formative years and I look back at their music with fond memories, including this classic from their 1995 album, “Insomniac.”

MGMT is an interesting group. They intentionally “sold out” early in their career by releasing songs like “Kids” and “Electric Feel” to gain financial stability so that they can create whatever music they wanted afterward. Their style of fusing rock with electric pop is unique and has made them one of the most popular bands in the world.

It’s not often that a song comes my way and gains my interests to point where I have it on repeat for weeks on end, but “When You Die” accomplished just that. This song is the most recent addition to my life’s soundtrack and it pains me that I didn’t discover it sooner.