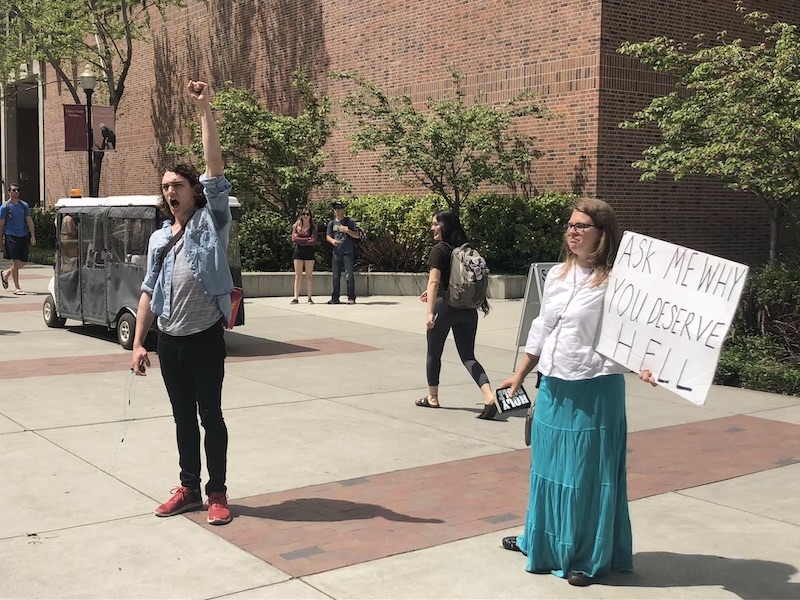 Two evangelist activists from The Campus Ministry USA came to Chico State and performed an open-air “preach-in” about sexuality and Christianity to a group of students at the BMU Friday.

The first activist, who identified herself as “Sister Myrna,” began in front of the Marketplace Cafe at around 12:30 p.m., shouting at students sitting outside the cafe and passing by. She carried a sign with the phrase ‘Ask Me Why You Deserve Hell,” and began by telling students they needed to repent and turn to Christianity.

@theorion_news Speaker with sign “Ask me why you deserve hell” pic.twitter.com/hvGsZcTNMy

The debate quickly drew a crowd, as some students engaged with “Sister Myrna,” asking her questions about her belief on sexuality and women’s rights.

At one point, a student she debated with grabbed her sign and sprinted to Meriam Library. ‘Sister Myrna’ chased after him to retrieve it, ran back and eventually gave the spotlight to another activist, “Brother Jed.”

“Brother Jed,” also known as George Edward “Jed” Smock, Jr., is an evangelist preacher who has become known for his “open-air” visits to campuses around the country that have been criticized for their confrontational, aggressive style. He began his preaching at around 1:30 p.m., shouting at students who tried debate with him, as well as at a passing group of students touring the campus.

Throughout this preaching, students from Gender and Sexuality Equality Coalition (GSEC) also came out with their flag and flyers for the Queer Prom, which is scheduled for Saturday at 7 p.m. As “Brother Jed” continued shouting at students, members of GSEC called for students to ignore him and “come to Queer Prom!” instead.

A tour of Chico State goes by. @theorion_news pic.twitter.com/EoCH4I8Su4

The debate continued past 3 p.m. The crowd of students eventually dispersed but “Brother Jed” continued to preach to passersby and onlookers.

The preaching took place on a day which this year is both Good Friday in Christian holidays, and Trans Remembrance Day nationwide. This week has been declared as GSEC’s Gender and Sexuality Week.