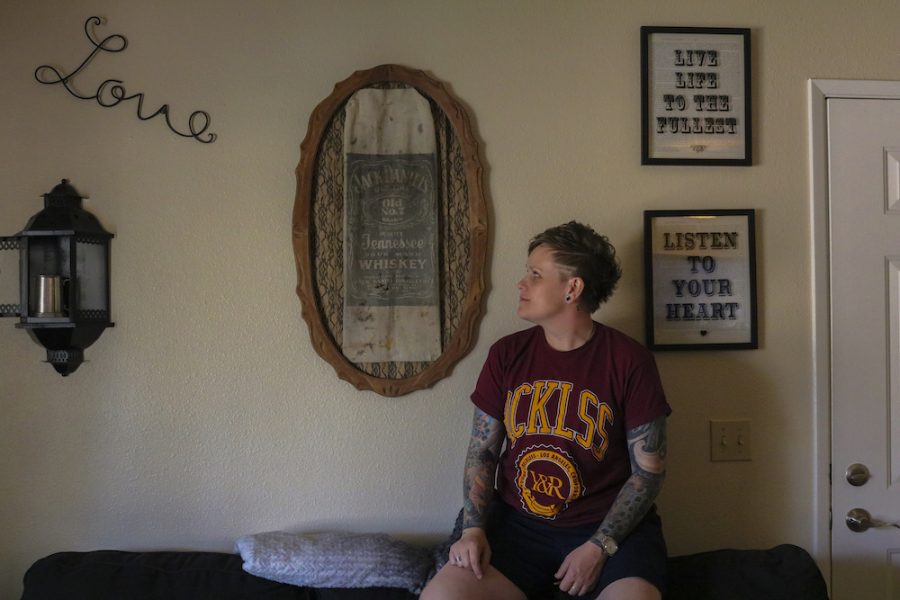 One of Jessie's favorite art piece is the apron her father used to wear, which has been recreated, and now hanging in her living room. Photo credit: Melissa Herrera

When the Camp Fire began on a fateful November morning, the small communities of the Paradise Ridge were ripped apart.

Families who had lived in the path of the blaze had lost their homes, businesses and towns. Hundreds of children were displaced to the remaining schools in the county. 85 people lost their lives.

But, from the ashes rose a phoenix.

Former Paradise resident Jessie Mercer is a self-taught artist with passion like no other. Desperate to help her community that had been scattered across the country, and hoping to heal within herself, she set out on what would become her most noteworthy artistic journey.

Within the months following the Camp Fire, Mercer curated the beginnings of the Key Project Tribute: Unlock Possibilities. Made entirely of keys from doors lost in the fire, she is in the process of creating a phoenix statue that will be given back to Paradise once completed.

On the day the Camp Fire started, Mercer was ensuring that her father was safe and had shelter that night. She became bothered that she and her community now had keys that no longer had doors to unlock.

“Sitting in that residue with those keys is a reminder of some pain,” Mercer said. “I thought there might be an opportunity to transition that pain into a positive and something that could be inclusive in my community. So, we threw our keys in a jar.”

Hoping that other families and community members might want to contribute, Mercer left 13 jars at local businesses in Chico and Red Bluff. People that had lost homes, businesses, churches, schools, boats, jet skis, safes and other items came from all over the area to drop off their keys. Some came with just a few, but others brought bags and boxes full.

Mercer now has over 10,000 keys from fire survivors and still receives more through the mail. She has the base completed and is now working on the wing structure, then eventually the feathers, head, beak and talons. She doesn’t have an anticipated end date yet, but will keep working until she’s sure it’s finished.

“There might be moments where i think it’s finished,” Mercer said. “But I’ll keep going back and keep critiquing to make sure I produce the best project, for not only myself as an artist, but for the community that it represents.”

The project will be a gift dedicated to Paradise and the communities affected. The Phoenix’s final landing spot will be at the Gold Nugget Museum in Paradise.

Mercer is also lending a helping hand to the displaced youth from the Ridge. In the past six weeks, she and her mobile art studio have visited six different schools in Butte County to create detachable murals with students of all ages. Every mural is personalized by the school and students themselves, allowing students to paint and create along with Mercer.

Mercer was awarded three grants to fund her mural project: Butte County Art on Wheels. A solar energy vehicle was donated for her to borrow until she can get a vehicle of her own.

“There was an importance after the Camp Fire which was mobilization, and going to where people were and living in the fact that we are scattered,” Mercer said. “I got over 200 businesses to listen to me with a flier I printed out and I just went around and asked for a paintbrush or a can of paint, or anything businesses felt like they could offer, so I could help now.”

Mercer still has five stops left in the next month, her next one being a collaboration with The Boys and Girls Club, who have absorbed over 500 children from the Ridge.

Jessie Mercer’s progress with the Key Project Tribute and Butte County Art on Wheels can be followed on their Facebook pages. The Phoenix is well underway, but Mercer expressed that keys are still being welcomed to be mailed in now and even further into the future.