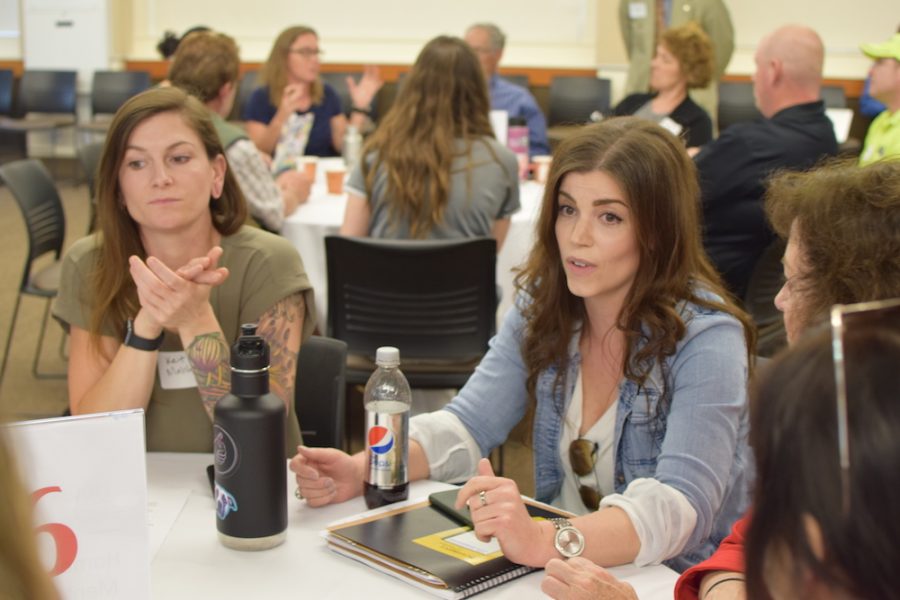 Students, faculty and staff all gathered together on Friday to come up with solutions to the increasing crime activity in the Chico community. Photo credit: Kendall George

Over the past few semesters, campus and community crime have been at a steady increase. With school shootings, stabbings, robberies and sexual assaults happening in close proximity to Chico State, the administration is looking for solutions and reaching out to students in finding solutions.

On Friday afternoon, a public safety forum was held in Colusa Hall 100. The safety summit was put on to bring campus and community members together in a discussion over safety concerns that have been brought up the past few semesters. University president Gayle Hutchinson, University Police Chief John Reid, Chico Police Chief Michael O’Brien, Mayor Randall Stone and A.S. President Alisha Sharma were there to talk about student safety.

“We can solve anything we put our minds to and because we are a community it is important that we come together to do so,” President Hutchinson said at the start of the summit. “I, too, am more than just a university president; I am a very concerned resident of the community where I live.”

The summit was held 2 p.m. to 5 p.m. and covered multiple topics on safety in and around the Chico State area. Topics included homelessness, mental health, diversity and inclusion and safety concerning partying. Each topic was broken up table to table where students, faculty, staff and community members were placed at each table to talk about solutions to each topic. There were two 45-minute-sessions with a 15-minute break in between. Note takers were at each table documenting what was said to help bring more discussion and problem solving after the safety summit session was over.

After the two sessions, a group conversation was started regarding what had just been discussed at each individual table.

“The incidents and rising crime that have occurred for the last few months and years have been very scary, uncomfortable, unsettling. That affects how we learn in the classroom, that affects our mental health,” Sharma said. “We live in a world where we are advised to not go anywhere alone, where if you don’t have pepper spray you are the odd one out and that school shootings are real.”

“I think the big takeaway for me really was working with the City of Chico Police Department to build bridges and relationships with our students of color on campus,” Chief Reid said. “I think we can be more engaged and we have a student body that wants to be engaged in that way.”

Chief Reid spoke afterwards on his takeaways from the summit. Reid said one topic he thinks needs attention is for University and Chico Police to "build relationships with our students of color." pic.twitter.com/fkqqi8FqTT

Senior Marqia Smith is a psychology student and president of the Just Unity Sistas. After the meeting, she reflected on what she believed to be the key takeaways of the safety summit.

“I think this meeting was very important,” Smith said. “I have experienced a lot of racism here and I have never experienced it so overt until I came to Chico State.”

“We need to reach out to students of color, black students in particular, so we can be a part of this conversation.”

However, Alejandro Ramirez, who was just elected as A.S. Director of University Affairs, did not think the meeting was productive.

“I noticed that there was a lot of people who had a lot of dehumanizing ideas about homeless and transient folks,” Ramirez said. “We always tend to ‘other’ them in a way we don’t do to other groups of people. A lot of our students are battling homelessness.”

Kendall George can be reached at [email protected] or @kendallmgeorge on Twitter.