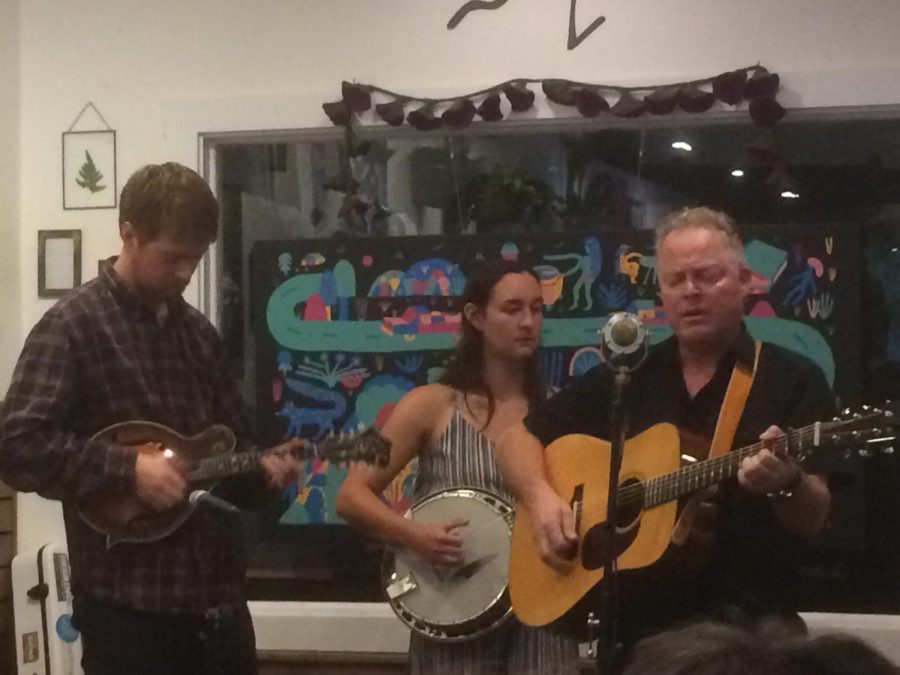 From left to right David Theissen, Christine Wilhoyte, and Steve Lawson play “Back to the Bar Room” for an enthusiastic crowd at Tender Lovin’ Coffee. Photo credit: Emily Neria

The band played several lighthearted songs with titles like “Back to the Bar Room,” “Here to Get My Baby Out of Jail” and “Too Much Mountain Dew.”

The crowd at Tender Loving Coffee sat either at the single long bar-style table or on stools bordering the room. Many nursed beers, ate pizza and tapped their feet to the band’s lively, easy-going set. One among them was Diane Wall, who was visiting her friends who frequently enjoy live shows at the venue.

“I’m here because my dentist is in the band,” Wall said.

The live music also drew Butte College student, Adriane Jones to the venue. She likes the music scene in Chico because of its variety and entertainment value and further explained that music appreciation classes opened her perspective on different genres of music.

Jones watched Theissen pluck out a complicated mandolin solo for “Too Much Mountain Dew.”

“Seriously, look at that!” Jones said during the solo. “One hand’s moving faster than the other.”

After their performance, the band members opened up about their own musical influences.

“My grandfather worked at a fire station in St. Louis and he and all the guys would play together,” local dentist and Green Mountain Bluegrass’ guitarist Steve Lawson said.

“My dad plays guitar and he’s the one who brought me to the Father’s Day Bluegrass Festival in Grass Valley where we all met,” Christine Wilhoyte, a Chico State senior, said.

Emily Neira can be reached at [email protected]