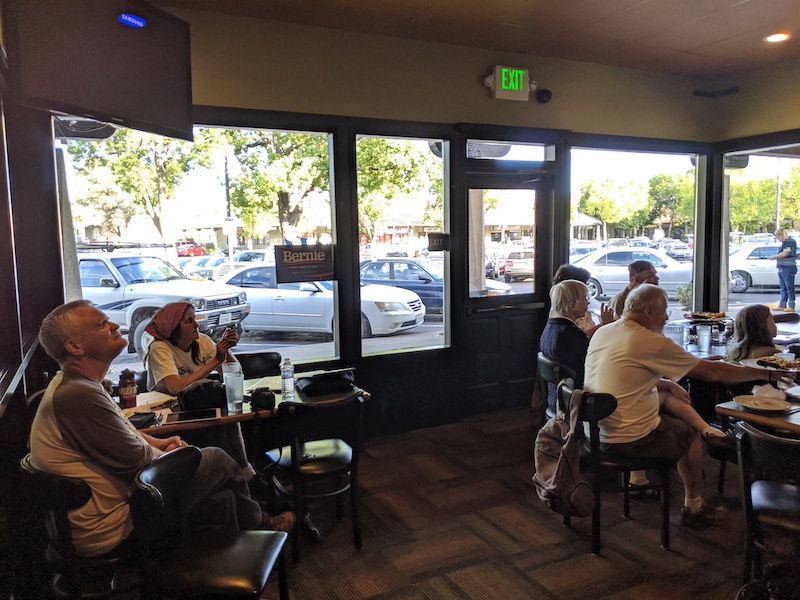 Visitors to Round Table on Pillsbury Avenue join the town hall and watch the CNN debate. Photo credit: Abram Melendez

While the event may not have been at the most ideal of places, the event served as the start of a long list of events made to garner support and raise awareness to the policies and character of Bernie Sanders.

Attendees displayed fervor and support of climate change and environment, showing a deep care towards the next generation.

Organizer Susan Sullivan has a long history of support for Bernie Sanders, working tirelessly in the last presidential election and she hopes to do the same in the 2020 election cycle.

Susan hopes to target Chico state students with information about climate change, Bernie Sanders, and the importance of creating positive change within the community of Chico State.

“We are going to do our best to bring in voters that have given up on voting,” she said.

How Susan intends to spread the message and how supporters organize across the North State is entirely grassroots and independently-run from the Bernie Sanders campaign.

“There were sub-groups, it wasn’t that there was one top-down organization running things,” Susan explained.

This event highlights the start of an election cycle.

Abram Melendez can be reached at [email protected]