Theatre company performs original play ‘at the end of Normal’

A theatre company and performance space, known as the Butcher Shop, put on a free production of an original play called “The Director’s Cut” on September 1.

The play was about a young, idealistic director named Julia DeFranco who is fired by a cruel producer before he releases her first professional film: “Children of Neptune.” Trying to reclaim her film, Julia uncovers a conspiracy involving Franz, her terrible (and thought to be deceased) father and a wealthy Russian woman who has been granted permission to re-shoot the ending to Julia’s film. 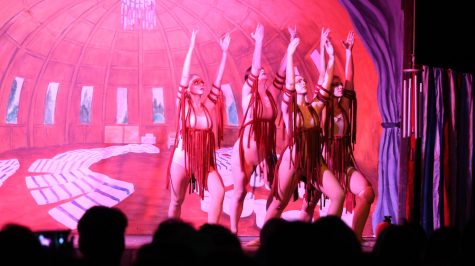 This play delves into themes about what a hero means to our society; the true motivations of artists and what imagination is in its purest form. The play even goes so far as to suggest that no one creates anything. It proposes that all ideas already exist, and people simply stumble onto them by imagining and exploring the truth; that it is the hubris of man to assume ownership of ideas.

“We wanted to write something about the villainy of Hollywood,” said producer Denver Latimer after the show. 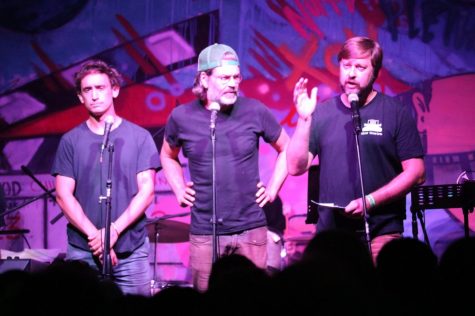 “Eventually, we figured out that this story about Julia was about our feelings about storytelling as a group, about collaborating with lots of people in the little Butcher Shop utopia that we create every year for Labor Day,” said co-director Dylan Latimer. 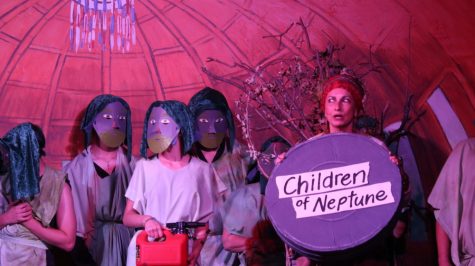 Children of Neptune are awaiting on stage as each one is given an addiction by Xon. Photo credit: Melissa Herrera

“I like seeing everyone come together as a town. All these people, We’re in the middle of nowhere,” said another audience member, Bibbiana Lazares.

The outdoor stage and food vendors occupied a clearing between orchards on the property of local almond farmer Greg Amaral. They were on the edge of town, and on several fliers, claimed, rather accurately, to be “at the end of Normal”. Audience members laid out lawn chairs and blankets on the dry grass and dirt. People milled about, listening to live music, drinking and eating, until the show started after sundown. 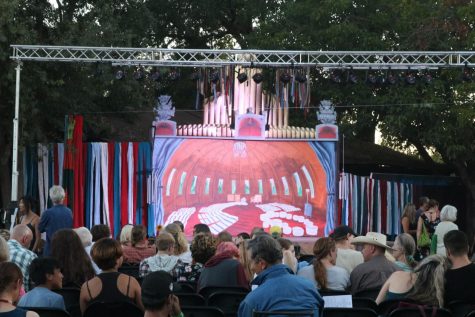 The main stage was decorated in an abundance of color and cloth. Photo credit: Melissa Herrera

The theatre company that runs The Butcher Shop, Slow Theatre, started in the Latimer’s backyard in 1989. Since then, it has moved to its new location and gained significantly more attention.

The name “Slow Theatre” is a play on the term “slow food” which refers to food that is locally grown and processed. Similarly, Slow Theatre and Butcher Shop avoid doing covers of plays and songs and instead come up with as much original content as they can. They also use garbage from local dumps to make their sets.

“The idea is to… paint it, turn it into art for one weekend, and then send it back to the landfill,” Dylan wrote in the director’s statement.

To learn more about Slow Theatre and the Butcher Shop or to find more of their upcoming events, visit their website.

Emily Neira can be reached at [email protected]