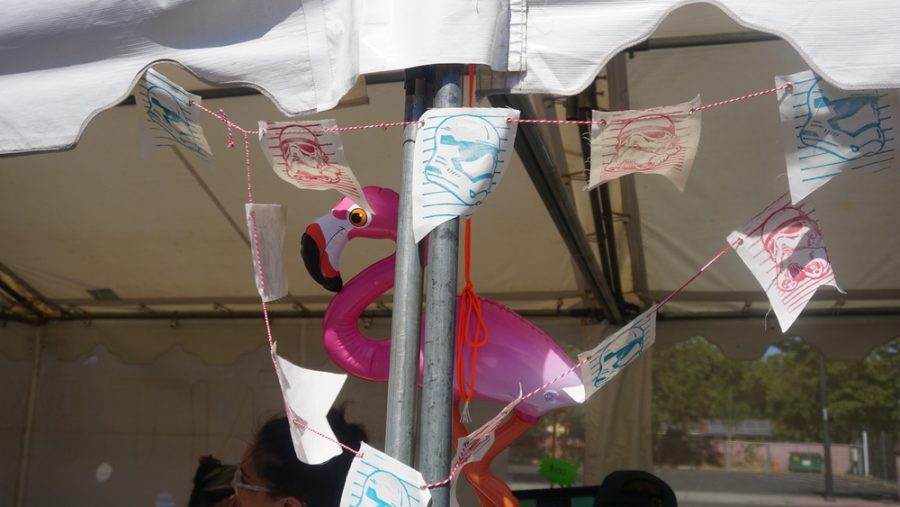 The 1078 Gallery hosted its first Chico Print Party; a gathering where artists can showcase and sell all different types of printed, visual art pieces.

The event was organized by Micah Black, an artist originally from Chico.

Black had always wanted to curate or organize an event in Chico to support the local art community, but he wasn’t sure how until he had an epiphany while driving.

“One day I was driving back from Chico to the Bay and it just popped in my head,” Black said. “I was like ‘I want to do a print fair’ and I didn’t know what it was going to be or what I was really going to do, I just knew I wanted to help the art community.”

Though the event was coordinated by Black, he credits the artists and his friends for volunteering to help make the Print Party possible.

“It’s just a group of volunteers, not getting paid for anything from [the Print Party],” Black said. “We’re just doing it for the satisfaction and for the people that are a part of it.”

Artists from as far as Redding came to the 1078 Gallery on Park Avenue to sell their artwork.

One featured artist selling their artwork was Ama Teibel.

A lot of her artwork was part of a collection called “Astro Babes” which were a compilation of illustrations depicting women with a sci-fi aesthetic.

Teibel’s inspiration behind her collection includes her interests in cyberpunk and witchcraft, among other things, and the desire to combine them to create her illustrations.

Another artist featured at the Print Party was local artist David Plant.

Much of his work depicted landscapes and animals of the natural world, as well as the occasional fictional creature.

Plant, a self-employed artist, makes his prints at home. He also teaches his art to children with disabilities as a side job.

“I always want to share my talent with other people,” Plant said.

Though this is the first Chico Print Party, Black hopes to hold more in the future, eventually turning the print fair into an annual event.

“Based on the artists and the feedback I’ve gotten from them, [the turnout] has been really good and that’s all I care about,” Black said. “If the artists are happy and the public, who have come here, are having a good time… it’s been successful for me.”