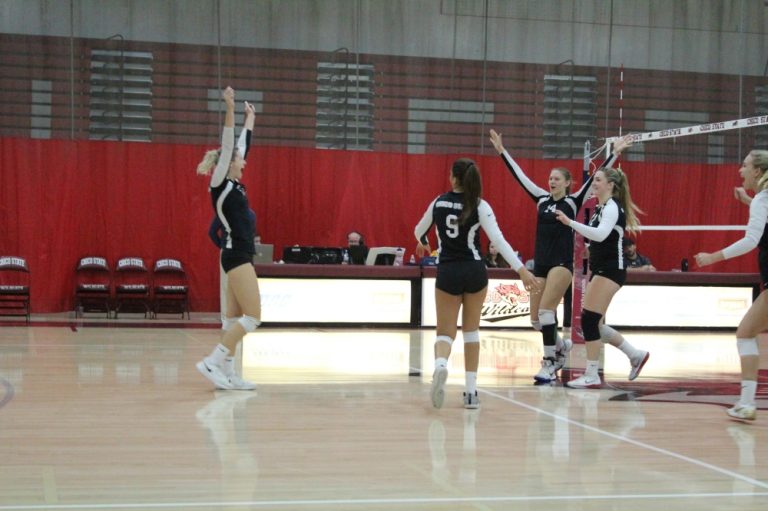 The Wildcats took command at the beginning of the Division II West Region Volleyball Showcase as they swept both Montana State Billings and Saint Martin’s Saints only playing six sets on Thursday night. The drive continued on Friday night and Chico State took another win in four sets against Academy of Art. The Wildcats were close to an unbeaten tournament but on Saturday night Concordia (Irvine) gave a five set battle and left Chico packing home.

Chico State’s confidence in the opening set was at an all-time high as they faced their last team of the tournament. But the Eagles made sure the Wildcats weren’t leaving the tournament without a five set game and were neck-to-neck the whole game.

Concordia got an early lead in the first set with a score of 5-3 but that did not budge the Wildcats as they came back in a 9-1 run with the help of Bekah Boyle as she contributed 3 kills and Kim Wright with a service ace.

The score continued to fluctuate as both teams traded off the lead. Once the Eagles reached 24-points, Chico only managed to score two more points. The set ended in favor of Concordia 26-24.

The Wildcats reciprocated the momentum and took an early lead of 10-7 in the second set. Chico continued to lead thanks to Boyle and Brooke Ono knocking kills left and right, and some Concordia service errors. The Eagles were not ready to let Chico State win as they snuck up and took the set 25-20.

In the third set, Concordia lost no time and took the early lead of 7-3. After a much needed timeout to strategize Wildcats Boyle, Ono, Wright, Evelyn Clonts, and Grace Shepherd came out ignited contributing kills to a 16-8 run that put Chico ahead.

Chico kept the energy going and took the set 25-23 keeping them in the game.

The Eagles did not make it easy for the Wildcats as they started the fourth set with a 9-3 run. Wright, Boyle and Shepherd continued with strong kills but that only got Chico slightly closer as Concordia continued to lead 18-13.

The Wildcat trio persisted with kills as they managed a 8-2 run that gave them the first lead of the set 22-21. As both eventually tied at 23-points, Makaela Keeve and Shepherd took the set for Chico with a kill each pushing the game into a deciding set.

With adrenaline radiating in the court, Concordia was ready to shut the game down with a beginning 4-2 lead. The Wildcats fought back and managed to pull a one-point lead. The Eagles had enough and exerted an 8-2 run putting them in the lead 14-9.

Chico hoped to comeback like in the other sets but only scored one more point before the Eagles took the set 15-10.