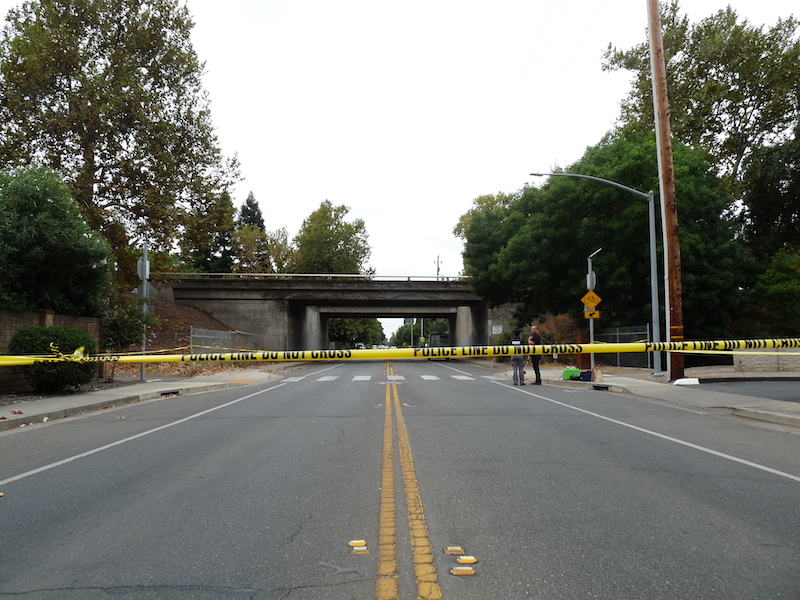 The road under the overpass on East Lassen Avenue was blocked off by police tape. Photo credit: Jessie Imhoff

A pedestrian was struck by a transport van on East Lassen Avenue early Friday morning, leaving the area under the overpass blocked off by police.

The overpass on east lassen Avenue is currently blocked off by police due to a van hitting a pedestrian. More information to come pic.twitter.com/4tk7TtAeFI

Officer Travis Johnsen and the collision investigation team responded to the scene.

According to Johnsen, the van was traveling westbound while the pedestrian was crossing the street. Both failed to see each other and react appropriately, resulting in the collision.

The pedestrian was taken to the hospital for his injuries. He has since been reported to have died at Enloe Medical Center.

Police are still trying to determine if the pedestrian had used the crosswalk or not, according to Johnsen.

Volunteers in police service blocked off parts of Lassen for this investigation. Anyone attempting to drive under the overpass would be redirected by these volunteers.

Volunteers with the police department are blocking off the roads pic.twitter.com/ooo6nwdCFK

The situation is under current investigation.