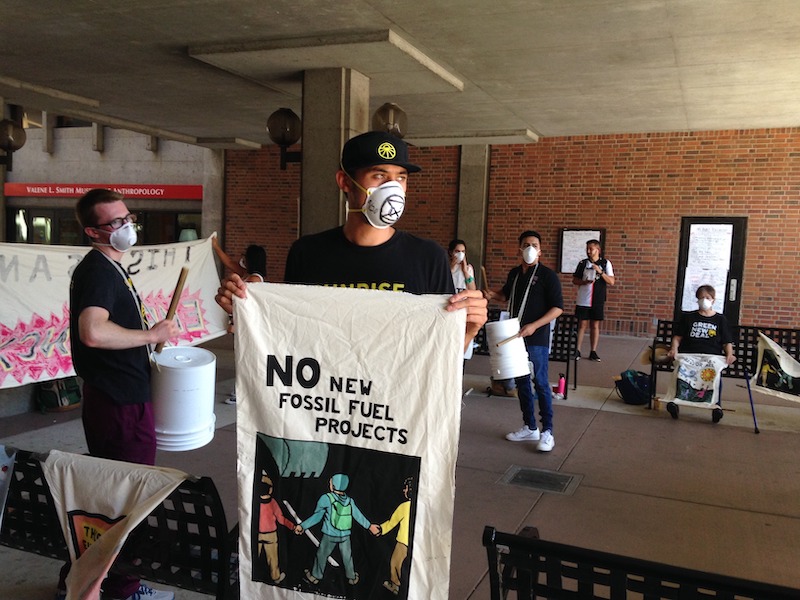 Students protested Thursday outside Meriam Library – using buckets as drums, smoke masks and their voices – to raise awareness about climate change.Starting at around Noon, students from the Sunrise Movement gathered around the south side of Meriam Library underneath the second floor, setting up posters flyers and playing a loud drum set getting people’s attention. “The climate crisis, we have to draw attention to it and we have to make climate change a priority in the United States.” said Steven Marquardt an organizer with the Sunrise Movement. “This small action is getting us towards that.”Once students gathered in place they began holding posters, placing them on the columns that support Meriam Library, put on smoke mask and began using their bucket drums.“The drums really draw attention they really bring people in from afar, it generates curiosity, it shows the energy behind the movement, we’re loud as we need to be,” said Marquardt. “It’s fun music keeps people inspired it keeps people energized and we’re going to have fun doing this”

The mask are supposed to represent the Camp Fire, the deadliest wildfire in California killing over 80 people.

“If you lived out here throughout the Camp Fire, you probably wore one of those masks because the smoke quality was so bad,” said Marquardt. “So we want people to remember that things like the camp fire are going to become more frequent and more severe if we do not take dramatic climate action now.”

“They are protesting the fact that nobody is paying attention to the scientific studies about climate change so they decided to come to the heart of the academy. Said Mark Stemen a professor of geography and planning at Chico State. “These are the walls that contain all this knowledge but nobody seems to be paying attention to it.”Stemen was protesting alongside the students, and said that they wanted to bring attention to the issue to the public. According to Stemen the administration didn’t have an issue with the protest.“The space out here is available for students to reserve and there is a process includes checking with the library, said Patrick Newell Dean of Meriam Library “In the past when there have been unplanned protest the campus responds and says ‘you shouldn’t be here.’ I just wanted to be here to say the library was created because of free speech and we support this.”

The library worked with the protesters and an ongoing flu clinic going on at the same time the protest ended around 1 p.m.Julian Mendoza can be reached at [email protected] or on Twitter @JulianMTheOrion.