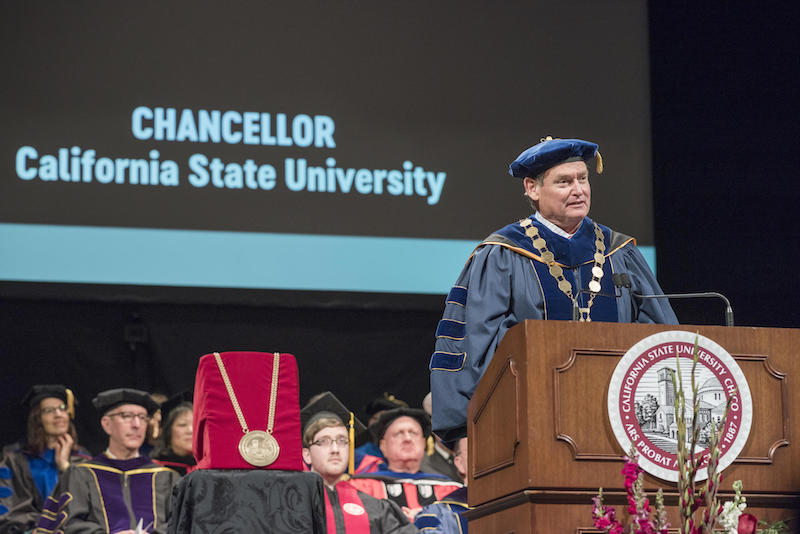 CSU Chancellor Timothy White speaks to Chico State that celebrates the inauguration of President Gayle E. Hutchinson, during a investiture ceremony, honoring a long-standing academic tradition and ushering in a new era of the University’s history, on Friday March 3, 2017 in Chico, Calif. (Jason Halley/University Photographer)

White became the seventh chancellor of the 23-campus system of 481,000 students in 2012. He previously held both academic and administrative positions at other universities including the University of Michigan, Oregon State University, and two University of California campuses, Berkeley and Riverside.

During the timeline of White’s service as Chancellor, the CSU system was still pulling itself together following the Great Recession having lost nearly $1 billion in state funding. Since then, funding has increased from $2.3 billion to $3.6 billion.

One preeminent contribution of White’s began 4 years into his tenure when White sprouted the Graduation Initiative 2025. The ambitious plan sets to increase graduation rates for both first-year and transfer students through a plethora of operations, including informed decision-making and financial support, as stated on the California State University website. Just three years after the project launched, the CSU system reported their number of students who graduated at an all-time high.

“During the Camp Fire, Chancellor White was in constant contact with me, listening and sharing concern for students, faculty, staff, and community members impacted by the fire. He visited campus on November 26, 2018, and met with members of our community, demonstrating his care and concern,” Hutchinson said.

The Board of Trustees has set a goal to have the vacant position filled by the end of the current academic year.