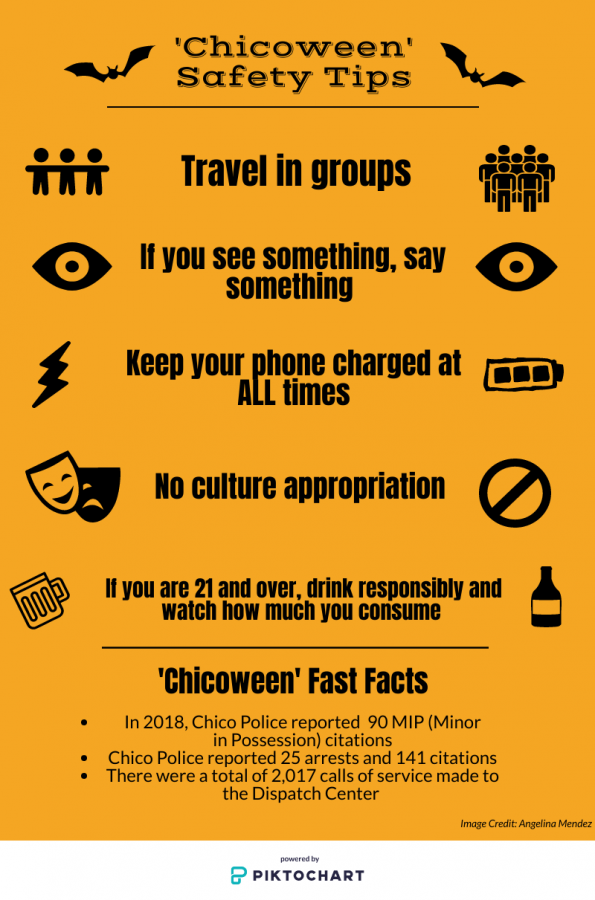 Chicoween refers to the time when students celebrate Halloween with candy, parties and crime.

Although this is a popular, fun time for some students, many others report that they intend to leave town or stay indoors due to the celebration’s history of crime.

Last year, the Chico Police Department had a total of 25 arrests and 141 citations from the period of Chicoween. A total of 2,017 calls for service were also made during this time period.

Natalie Alvarez, a first-year student and kinesiology major, was asked about how dangerous she thinks Chicoween will be.

“I’ve heard stories and I’ve read articles about incidents happening such as stabbings and robberies during Halloween,” Alvarez said. “But I also have seen the increase of rules and police over the years, so I’m not very fearful this year to go out and have fun.”

“Students get concerned hearing about visitors from other colleges who come to Chico to party for Chicoween,” Alvarez said.

“A lot of people from the outside and from different schools such as the University of California, Davis and Sacramento State come up here and cause messes and problems,” Alvarez said. “A lot of (students) are planning to not go out because of how busy city life gets and how crazy people get as well. The drugs and alcohol take a larger toll on people, which causes things to happen like the “No-Guest” time period.”

CPD Commander Chistopher Nicodemus was asked to explain what Chicoween means to the city.

“Halloween is something we have all officers available for,” Nicodemus said. “We realize that during this time period there’s an influx in the community — we want to be prepared for that. Many people are drawn from the outside because it’s a fun place to be at this time. When you factor in things like alcohol and drugs, that’s a recipe for poor decision making and risky behavior. We want people to be smart about this.”

CPD and the University Police Department have teamed up with Chico State to enforce rules to keep the community and campus safe, creating rules like the “no-guest” time policy, which asks that on-campus residents not host visitors from outside of Chico.

“It’s difficult because we can’t force people to not have guests, it’s a request,” Nicodemus said. “Some people will honor that and others won’t. The past has shown that the outsiders are predominantly the ones in the community that cause problems. It’s a rule that we hope we can partner with the community to enforce and honor.”

Other policies that have risen this year are the extension of the no-guest time period, a glass ban, double patrols and more resources available to students.

“We are working heavily with Chico PD this year to have double staffing and more foot patrols and officers on bikes, cars and on duty at all times in case of an emergency or to take care of people in the community causing trouble,” Nicodemus said.

“I understand people want to go out and have fun but if you do, stay in groups, inform others of your whereabouts, have your fully charged phone on you at all times. If you get intoxicated, make sure you have a way to get home and try to exercise good judgement at the same time.”

In addition, administrators are asking students to select their outfits carefully.

On Oct. 23, Sandy Parsons, Interim Vice President and Dean of Students for Student Affairs and Trevor Guthrie, Associated Students president, sent out a mass email to students urging students to be mindful of offensive costumes and advising students to be aware of their behavior.

“No costume or state of dress is an invitation for unwanted verbal or physical behaviors,” Parsons and Guthrie said in the email. “Costumes and masks offer a sense of anonymity and potential criminals can disguise themselves as they prey upon unsuspecting partygoers. If you see something inappropriate or dangerous, speak up and take action if it is safe to do so.”

Angelina Mendez can be contacted at [email protected] or @theorion_angie on Twitter.