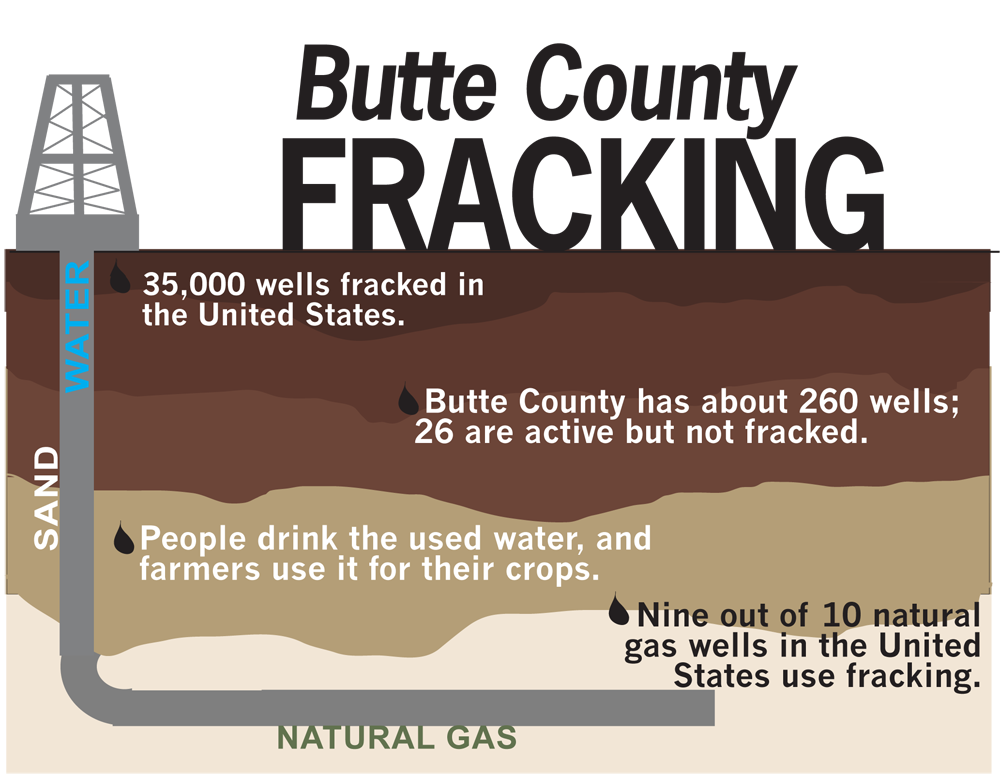 Community-led organizations throughout Butte County are building an alliance to protect groundwater from hydraulic fracturing commonly known as fracking.

The Butte Environmental Council, a nonprofit that focuses on education and advocacy, will meet with the Butte County Water Commission Wednesday to discuss a resolution that would protect Butte County from hydraulic fracturing.

The policy changes would require corporations to apply for permits calling for environmental review and a public hearing to obtain community feedback, said Robyn DiFalco, executive director of the Butte Environmental Council.

The county would not approve any future fracking proposals if the resolution passes. A moratorium would follow the resolution until the final vote in August, DiFalco said.

“It’s taking something that’s not being offered, and doing it in a violent fashion that’s leaving the area ruined,” Stellar said. “That’s earth rape to me.”

There are about 260 oil wells in Butte County, said Dave Garcia, a member of the council’s advocacy board.

Currently, there are 26 active natural gas wells that produce gas in Butte County, DiFalco said. These wells are conventional, so they don’t require fracking.

Oil and gas companies can, however, stimulate the rest of the approximately 234 idle wells by injecting them with water and chemicals, or fracking, according to a document from the Environmental Protection Agency.

The Division of Oil, Gas and Geothermal Resources supervises the drilling, maintenance, plugging and abandonment of onshore and offshore oil and gas wells in California, according to its website.

California holds about 210,000 oil, gas and geothermal wells, according to the division’s website. About 88,500 of those are still in use.

In 2012, 4,680 new wells were drilled in California. The website doesn’t specify which are fracking wells.

The division does not keep track of these wells, their locations, the status of the wells or where drillers dump waste water, according to Clean Water Action’s website.

Garcia said he witnessed this firsthand at a commission meeting when the commission’s board questioned a representative from the division about fracking in California.

The representative said he did not know anything because state legislation doesn’t require it.

However, the division’s website claims that fracking has been happening for more than 30 years without reported damage to the environment.

“Now we know that it is happening in California, and given the horror stories we’ve seen in other communities, we want to make sure we have local protections in place before we have a horror story here,” DiFalco said.

Kern County farmer Fred Starrh experienced damage as a result of fracking, as reported by the Bakersfield Californian in 2012.

He won an $8.56 million settlement after a decade-long trial against Aera Energy, one of California’s largest oil and gas producers, for contaminating his groundwater with fracking waste water.

Though he might have won in court, Starrh lost all his crops.

Oil and gas companies are fracking Sutter, Glenn and Colusa counties, all within 90 miles of Chico, according to the Center for Biological Diversity’s website.

Community members can attend Wednesday’s 1:30 p.m. meeting of the Butte County Water Commission at the Board of Supervisors Chambers, located at 25 County Center Drive in Oroville.

Yessenia Funes can be reached at [email protected] or @theorion_news on Twitter.