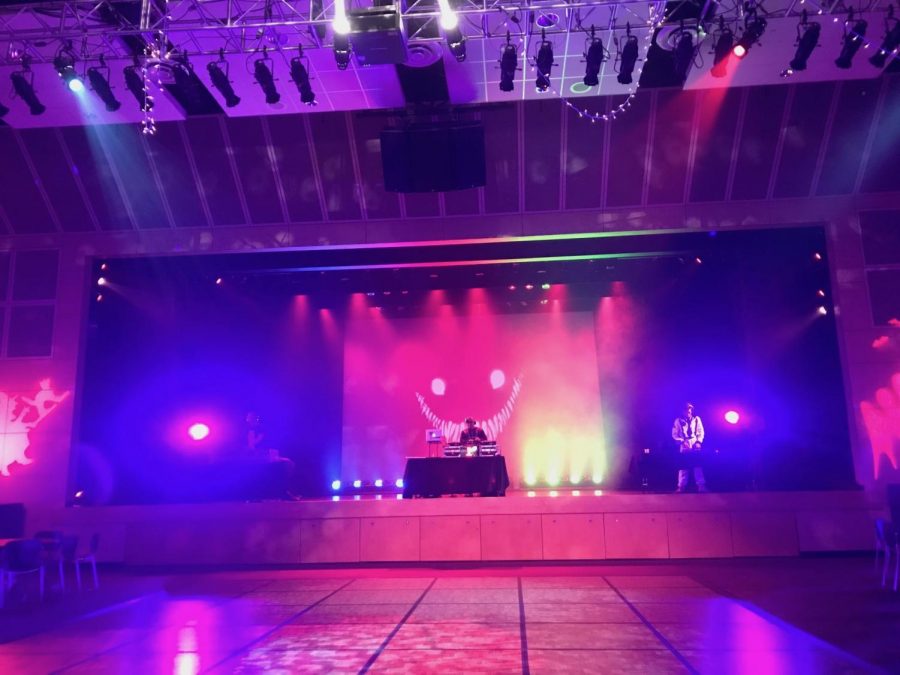 The stage at the silent disco had three DJ's set up playing their own music. Photo credit: Danielle Kessler

Chico State’s 2nd annual Halloween silent disco made for some good old-fashioned spooky fun. Presented by Associated Students, the night was a chance for students to relax, eat snacks and jam to music through their headphones.

Brandon Aure, the student outreach and marketing coordinator for Associated Students Productions, described the disco as “an event for students to come out, eat some free food and enjoy themselves.”

Set up in the BMU, the room was fully decorated Halloween-style, complete with lights, a free photo booth, and an endless supply of pizza.

Second-year students Ryan Cano and Isabel Fabbro described their anticipation for the event.

“I’m hyped,” Cano said. “I feel like it’s going to be such a completely different experience.”

The BMU was transformed, with three DJ’s set up on stage, each playing their own set of music that students could choose from. Students were vibing on the dance floor, feeling fully immersed in the music blasting through their headphones. Each station also had its own color that showed on the headphones, so you could see what each person was listening to.

A free photo booth also made the night more memorable, also including some props to use for the photos.

Later in the night, Cano and Fabbro shared their thoughts about their first silent disco experience.

“Absolutely mesmerizing, every station is mesmerizing,” Cano said. “It’s nice that they have three different stations for people who want to hear different music.”

Another entertaining part of the night was realizing how funny it was to be in a silent room, with just the sounds of dancing and people singing along to no music once you took your headphones off.

“My favorite part is taking off your headphones and listening to people sing and hearing everyone’s footsteps,” second-year student Melody Beam said.

Overall, the Halloween silent disco was a blast and a great opportunity for students to kick back after midterms and just enjoy the spirit of Halloween.

ASP has tons of events scheduled throughout the year. To check out more events, visit the campus event calendar, or the AS event calendar.