One year since devastation: Life after The Fire 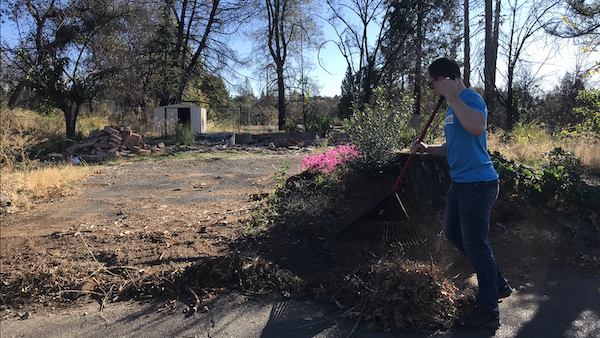 James Mayne raking the leaves in front of his home in Paradise. Photo credit: Jessie Imhoff

By The Orion News Staff

On Nov. 8, 2018, what began as a spark at around 6:30 a.m. in the small town of Pulga (about 30 miles outside of Chico) spread to the nearby community of Concow, with Paradise in its path. By that evening, it was already the most destructive wildfire in California’s history.

One year later, Butte County is still reeling from the traumatic after-effects of the most devastating wildfire experienced in Northern California. It all but destroyed the towns of Concow, Paradise and Magalia. Yet, some are working hard to return to the cities they made their lives in before the fire.

As Paradise works on rebuilding, many people are choosing to stay and rebuild themselves.

That is what Jillyean Kellogg, an elementary school teacher in Chico, and her family decided to do after the fire. However, rebuilding turned out to be harder than they expected.

“We had thought we would be building our home by November,” Kellogg said. “That’s not happening… We were really hoping we’d be further along.”

A lot of the new permits and regulations now required to building a home in Paradise have been the source of headache for Kellogg’s family.

“We had a four bedroom home on our lot and with our rebuild, now we are being told we can only build a two bedroom house because the regulations have changed,” Kellogg said. “That’s a whole different ball game than what we were planning on doing. You think you’ve got it and you start to go forward and then it’s 10 steps back.”

The new plans that they are going with has fire safety as a critical feature.

“When we got our plans for our house, we went specifically to an architect down in San Diego that designs homes for people who live in wildfire zones,” Kellogg said. “So we feel comfortable with the concrete and the steel. Our house will be very different than the house that we lost.”

Their new house will have to be smaller to follow regulations that deal with distance between houses, Kellogg said.

The emotional effect of the Camp Fire lingers in Kellogg.

“Coming up on the anniversary of (the fire), I was already feeling anxiety and then this week, with all the fires starting again all over, it started to bring back a lot of really horrible panicky feelings that I had that day trying to get home,” she said.

The family is still moving forward with rebuilding, despite the hardships.

“I think we thought we’d be a lot better than we are, especially emotionally,” Kellogg said.

Living on the ridge

The day after the Camp Fire, Deborah Matthews was alone in a shelter at Pleasant Valley Baptist Church. She had no idea if her home had made it through the fire after battling her way through the flames down the ridge.

Matthews, a longtime researcher at University of California Riverside, had researched where she wanted to retire for years when she finally decided to build her home in Paradise in 2014.

She said she put months of fireproofing research into the home, as best as she could plan for the area. Yet, the day after the fire, she couldn’t be sure all of her planning had been enough to ensure the survival of her home.

She soon had her answer: her house made it through.

Although luckier than many others, Matthews said living on the ridge may be easier for someone in her unique circumstances. As a single, retired person who lives independently and mostly tends for her home in her own time, she says she rarely goes out, and is barely affected by restaurant closures, traffic from the debris clean-up or, recently, shipments of cement to the many homes being rebuilt.

The biggest challenge, she says, has been the power shut offs that have come in six waves in the last six weeks.

“It would be nice if they would stop happening,” she said, then added. “I prefer to look on the bright side of things.”

Despite constant power shut offs, contaminated water and an ongoing debris removal process, many Paradise residents can’t wait to get back to a home on the ridge. Many still wait in line at the permit and development office in Paradise, hoping to get their homes built before the end of the year.

People like Matthews, who are single and have a home that survived, acknowledged that they face different challenges than others who have families and are working to rebuild, like Kellogg.

For many, especially those who had little insurance before the fire, the fight for a normal life is still ongoing.

The Orion’s News Staff can be reached at [email protected] or @theorion_news on Twitter.