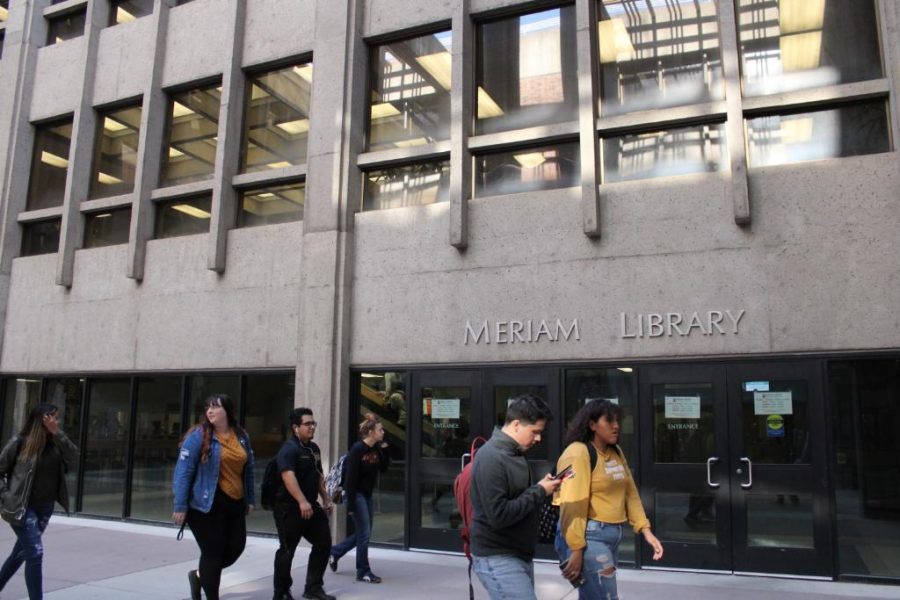 University Police responded to student’s concerns over threatening graffiti that was written on the third floor of the men’s restroom at Meriam Library Wednesday.

Around 7:30 p.m. a student reported to the circulation desk at the library of a threat that allegedly had been written in chalk on the men’s restroom on the third floor. The message that had been written in one of the stalls said, “THERE SHOOTNG WENDSDAY.”

The investigation on who wrote the graffiti and what their motive may have been is still under investigation.

When The Orion asked University Police on Wednesday at noon how they determined the graffiti to not be a threat to campus, Sergeant Davidson said to speak with the University of Communications for the most updated information.

In an email sent out to the student body via email at 5:11 p.m., University Communications let the campus know that the school had investigated the situation and determined that the message was “not specific or credible.”

The email was signed “University Police” but UPD Commander Christopher Nicodemus said he had not seen the email and that it was written by University Communications.

“According to what UPD has told me when they receive a report about a possible threat,” Media Relations Coordinator Sean Murphy said. “They utilize, depending on the circumstances a mix of qualitative and quantitative strategies to asses credibility… A credible threat would be one that’s made with the intent and the apparent ability to carry it out and a threat becomes specific when they can verify as many of the who, what, when, where and why factors as possible. So in this situation, they concluded there was no specific and no credible threat.”

According to Nicodemus, UPD had originally sent a Community Service Student officer to investigate the graffiti on Tuesday night and he could not find it. They sent a second female officer to check the women’s bathroom and could not find any graffiti on the third-floor bathroom either. in response, University PD increased officers on patrol Wednesday.

Nicodemus commented that UPD has to balance confirming legitimate facts and “rushing them to everyone,” as to not send knee-jerk reactions that could have people in a panic. Facts must be run through the Chief of UPD, the president of the university, the vice president, University of Communications and assure everyone is on board with the information that is being released.

“We know incidents like this are upsetting for all,” the email said. “Please know that UPD will immediately initiate our emergency notification protocol if/when we possess credible and verified information that supports the existence of a significant emergency or dangerous situation involving an immediate threat to the health and safety on campus.”

They followed their statement by saying that they will continue working with the University of Communications to let students know of potential threats on campus as quickly as possible in the future. Depending on the situation emails to students or the Chico State Twitter account will be used to alert students that the University is aware of potential safety threats.

Nicodemus said that the rate at which UPD investigates and how fast something can spread on social media is sometimes too fast to keep up with, but that the department strives to keep student safety and information as a top priority.

“I’m not underestimating their [student] reaction,” Murphy said. “Their reaction is very, very real and they are allowed to feel that way. But this also underscores the importance of knowing what is real and what is maybe not the real story. I think this is a good example of trying to understand digital literacy in social media posts. They can go viral and then, within the school’s population could get caught up in this and it’s just scary.”

Those with more information are encouraged to call University Police at 530-898-555.

This story will continue to be updated as more information is discovered.