Regular season winds down as Wildcats are still in full throttle 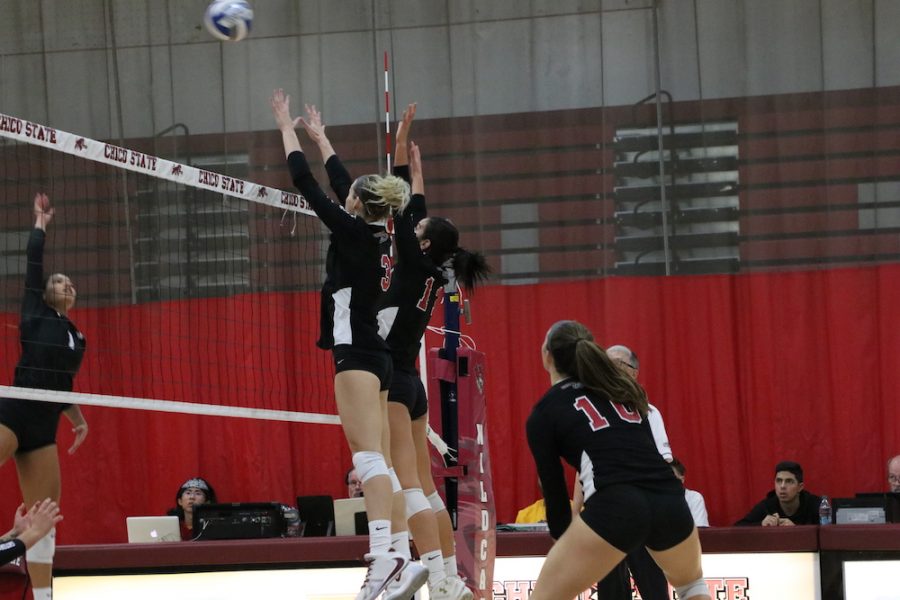 Kim Wright and Kelly Jacome work side by side to prevent San Francisco from hitting the ball to their side. Photo credit: Melissa Herrera

The season is winding down for Chico State volleyball and they are determined to make the most out of the later part of their regular season. Wildcats took home a win, three games to one, against the San Francisco State Gators Wednesday night, which was the Cats’ second to last regular season home game.

However, the fourth and final set of the night played out a little differently. The Wildcats jumped on the scoreboard right away and carried their momentum all throughout the last set, finalizing the match with a score of 25-7.

The team momentum was carried with the help of outside hitter, Gretta Kirkby, who subbed in to serve for libero, Brooke Fogel. Kirkby had a large responsibility and she knew she had limited time to shine. As she stood along the sidelines while the rotations on the court progressed, she had to prepare herself both mentally and physically to serve.

One must possess certain skills to be a designated server. Coaches choose players whom they know can perform when needed and when under pressure.

“I always try to be super loud and really competitive, but also very communicative on the court,” Kirkby said. “My energy and my ability to talk to teammates is really important. Communication is something we’ve been needing overall.”

Another key player for the Wildcats is middle hitter, Makaela Keeve. She had taken the “Wildcat Spotlight” this week and was commended for playing a full six rotations on the court instead of three. This demands a continuous flow of energy from Keeve and requires her to build up her stamina.

“Having the reps in practice makes it easier and I make sure I eat a lot of food before the game,” Keeve said.

Keeve also mentioned the importance of faking it until you make it, which I’m sure many athletes can relate to.

“We all get tired, but it’s just about keeping up the energy for our teammates and for the game,” Keeve said.

As a middle hitter, there are always things to be working on to step up one’s game and improve upon skills, no matter how long one has been playing volleyball. Keeve mentioned how she is currently focusing on practicing the setter-middle connection with setter, Brooke Ono. Earlier in the season, Keeve was getting tooled more often with blocking practice, she is helping her back row.

“I’m also working on fundamentals like staying low between plays and making sure I’m watching the play rather than just the ball,” Keeve said.

The win adds to the Wildcats overall record of now 13-10. The last regular season home game will be played on Saturday, Nov. 9 against Stanislaus State. Senior night will also be celebrated, as four, star seniors will say a bittersweet farewell to Acker Gym.

Karina Cope can be reached at [email protected] or @KarinaICope on Twitter.