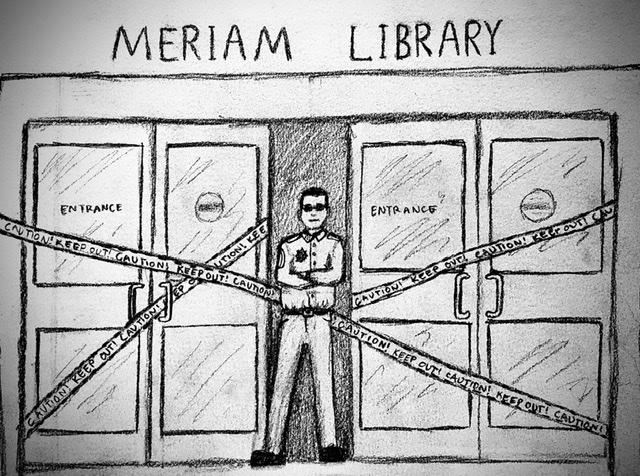 Once again this semester, it’s time to address the ongoing failure of our University Police Department to provide information to the student body, as well as to faculty and staff, in a timely manner.

Last week we had a second (known) threat of a shooting in Meriam Library. Graffiti found on a bathroom wall Tuesday appeared to be threatening a shooting at the library the next day.

The image spread on social media, but there was no communication from the police until the next day.

It wasn’t until after 5 p.m. that the PR office addressed the incident, eventually deemed a “non-threat,” in a mass email to students.

Not only did the police department insist that the PR team handle information about the incident, it took some work to explain why this threat was deemed a “non-threat.” At least this time they eventually emailed students to notify us that the incident had taken place — unlike last time, when the library was actually evacuated.

It’s clear that University Communications is in control of the information released by our police department, and that the police department doesn’t hide it. The officer we always go to for daily information, Commander Nicodemus, acknowledged that he hadn’t read the email sent out to the campus, and this type of information handling by the PR office seems pretty commonplace.

This a security and transparency problem for Chico State that cannot continue to be accepted. The media cannot constantly be told to defer to the PR team for information about all incidents and threats to safety. That should be known as the primary responsibility of the police department.

Why should we trust the university if its policy is to let the PR team handle and spin every circumstance, when these are the same people hired to make the university look good in every situation? If your parent is helping you go to college, why would they want you to trust a school that is so slow to notify students about these incidents and that has its PR office handle information that should come from the chief of police?

As for the email sent to students about the graffiti, that may or may not have been a threat — it is unfortunate that the university felt the need to call out students who shared this image on social media as if they should have kept it secret. The need for this email is ultimately undermined because the image on social media was how many people, including faculty and staff members, found out that the writing was in Meriam Library.

Perhaps the police would have preferred that nobody found out about the graffiti in order to prevent panic (or to prevent any whispers of another shooting threat at our own library). However, wouldn’t it make people feel safer if police would simply address the issue themselves, rather than letting the PR office handle the entire affair — and not in a timely manner? For that matter, why won’t the police department work with our newspaper to help get accurate information out to students as quickly as possible since we have a platform that can readily reach and notify our classmates as well?

Once again, this all comes back to President Hutchinson’s administration. If she wanted things to change, they would change. Instead, we are left with a system that doesn’t admit to sudden evacuations of buildings for days and needs the PR team to spin every incident that happens on campus, threat or no threat. Why should we feel safe?

The Orion will continue to investigate every incident like this by demanding that the police department responsible for our safety provides the information they have on these incidents, and we will continue to let the public know when that duty is not followed through. It is not acceptable to allow a PR department that spends every day trying to make the university look good to be the first authority on what is happening on campus.

It’s time we demanded the university police department to provide the information that they have, right when we need it — not a day later through University Communications. Our safety depends on it.