A Tuba to Cuba brings a sax to Laxson 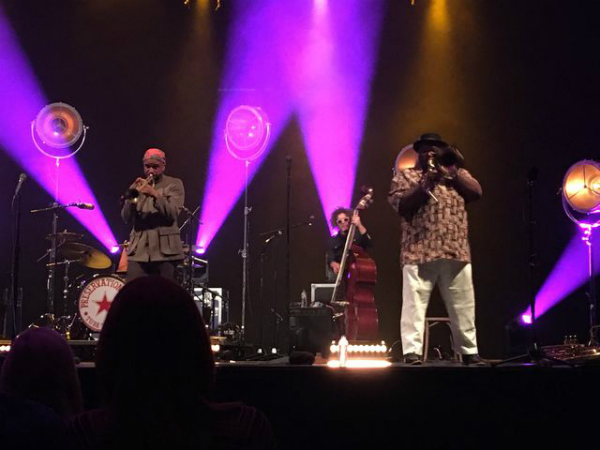 With little to no words spoken, a New Orleans jazz band delivered a stunning set Wednesday night. The band started the night off with songs that created a colorful and lively atmosphere encapsulating Chico State with Cuban culture.

Preservation Hall Jazz Band’s studio album “A Tuba to Cuba” was influenced by a trip the band took to Cuba in December 2015 where they explored the links that New Orleans and Cuba shared through their tragic history of slavery and cultural degradation.

During the PHJB’s set, front man and bassist, Ben Jaffe, described meeting an incredible 16-year-old bassist in Cuba whose presence made an impression on the band for life.

“She was an incredible musician, but lacked the proper resources to get herself a quality bass, so I promised her I’d get her one,” Jaffe said. “I didn’t realize at the time how hard that would be, but eventually we provided her with a quality bass that she could cherish.”

Experiences from Cuba fueled the band’s creative energy and when they got back to New Orleans, they were more determined than ever to create new music. Their experiences and inspirations spanned two albums, “So It Is” and “A Tuba to Cuba.”

PHJB performed their refreshing new album alongside Cuban artist, Yusa, who provided lively vocals and spirit, encouraging the audience to dance. Slowly, audience members began to rise and groove to the instrumentals, some standing up to dance on the side aisles and in the back of the auditorium.

With increasing beat and rhythm, more than half of the crowd danced to the front of the auditorium as trombone player Ronell Johnson left the stage to perform in the crowd. The sounds in the auditorium reached limitless heights as the band and Yusa combined their musical geniuses to form a riveting last performance.

When the band and Yusa finished their encore of “Sugarplum,” they received a standing ovation and applause that ran well after the band had left the stage.

Melissa Joseph can be reached at [email protected] and on Twitter @melisstweetz.