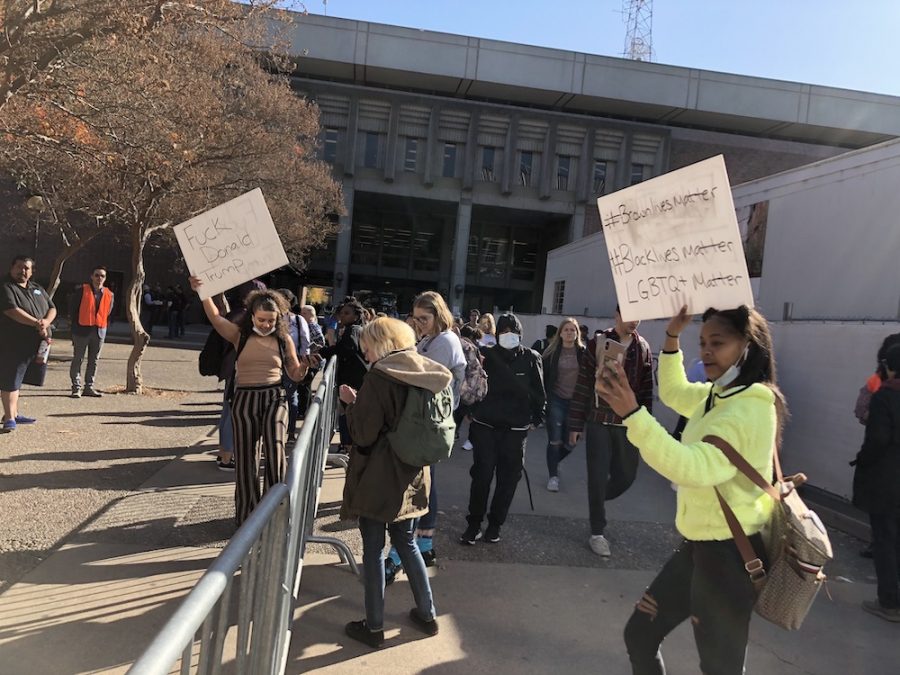 Protestors gather around the fence by the Young Republicans booth outside of Glenn Hall. Photo credit: Ricardo Tovar

Over the past week, tensions have been running high among the liberal and conservative students on Chico State’s campus. From Tuesday to Thursday, many students have used their right to peacefully assemble and freedom of speech. Four criminal charges have been filed — three for battery and one for indecent exposure.

“We need to be ADA (Americans with Disabilities) compliant and also so students can get to classes and access their educational resources,” Murphy said. “Number two, it was to ensure student safety. Student safety is priority number one and even supersedes first amendment rights. If people are expressing themselves, that’s fine. That’s what this country was founded on, and as a public institution, we take that very seriously. But when student safety gets compromised, that’s when we have to say student safety is paramount. When people become violent or start harassing, that’s when steps are taken.”

The Thursday protests began early in the morning and lasted until around 4 p.m. The Chico State Republicans group remained tabling as small crowds from non-tablers gathered around the fence throughout the day. The protestors employed similar techniques to the past two days, such as playing the anti-Trump anthem “FTD” on replay, shouting anti-Republican Party sentiments, and for the most part, peaceful assembly.

Some new strategies used were dancing in solidarity and hanging and lifting several signs with pro-LGBTG+, pro-immigrant and anti-Donald Trump sentiments.

“The university’s priority is protecting all students, and I’m not going to discount anyone’s experience and what they perceive at all,” Murphy said. “But I’m not discounting anyone’s personal experiences, aggressions, or microaggressions. The university takes that extremely seriously. Gayle Hutchinson takes that extremely seriously. When things like this happen, we are not protecting one group or the other.”

University Police was looking on during the entire day, ready to stop things if they got out of hand. Sergeant Bryce Davison said that students have the right to freedom of expression, regardless of their views and that they will not stop anyone who is peacefully protesting.

The UPD’s primary concern is keeping students safe, and they respond if someone files a report and is a reasonable victim of a crime. Sergeant Davison has confirmed that there have been criminal charges filed against the woman from Tuesday’s viral battery video, but it is still under investigation.

When contacted about the four criminal charges filed, including against the woman who slapped the president of the Chico State Republicans club outside Plumas Hall Tuesday, Student Conduct, Rights and Responsibilities responded with The Family Educational Rights and Privacy Act (FERPA). The office said that for students’ privacy, they can’t disclose information about charges against them to The Orion.

The office said all information about the female student and about how the protests would be handled would come from University Communications.

President Hutchinson sent another email addressing the protest at noon. Hutchinson reminded the campus that while freedom of speech and opposite viewpoints allow the chance for conversation, anyone who breaks the Standards of Student Conduct will face disciplinary action.

Expression may take a variety of forms, such as speeches, signs, written materials, public assemblies, parades, demonstrations, and artistic representation.
Freedom of expression, however, is not an absolute right. It coexists with other rights and the need for public order.
Exercise of the right of free expression should not interfere with University functions, imperil public safety, or obstruct or damage University facilities.
The University will establish and enforce lawful campus regulations regarding the time, place, and manner of the exercise of free expression by individuals and groups.
The University may impose reasonable time, place, and manner restrictions on exercise of the right of expression, to preserve the safe and primary operations of the campus.

Unreasonably interfere with student’s ability to participate in the educational process or to gain access to the educational resources and opportunities the University provides;
Disrupt University activities, including classes in session or other scheduled academic, educational, athletics, cultural arts, and career programs or with use of Meriam Library;
Obstruct the flow of pedestrian or vehicular traffic;
Interfere with or disrupt the conduct of University business and operations;
Employ unauthorized sound amplification or create unreasonable noise disruptive of normal University activities;
Disrupt the residential tranquility of on-campus housing facilities; or
Violate any federal, state, local, or University safety code, such as regulations set by the State Fire Marshal.

The last of the policy addresses illegal speech. It states that defamation, obscenity, terrorist threats, false advertising, criminal harassment and promotion of actual or imminent violence or harm is not protected under the First Amendment.