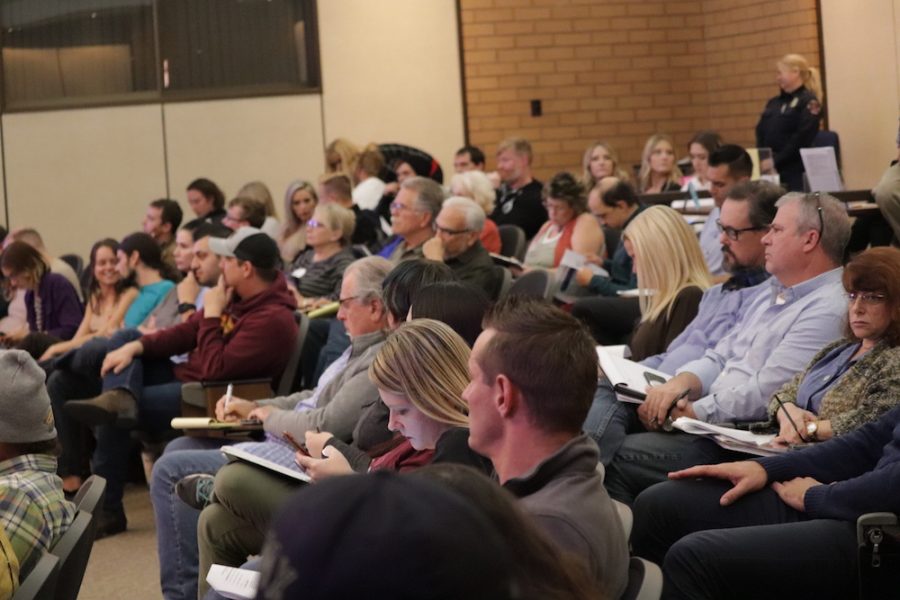 The audience taking notes on what the presenters were discussing. Photo credit: Hana Beaty

Through an attempt to avoid a council stronghold, the city council constructed a series of public hearings for community input.

As the first public hearings for district-based elections began that night, the council continued from the most recent meeting, having approved a resolution of intent to move towards district elections based off the California Voting Rights Act of 2001 and letters from affiliated parties citing issues and arguments of the need of district elections.

As the city council discussed how to implement the legally-mandated requirements, other aspects were examined including the demographics of Chico, school locations and the voices of 15 public opinions who chose to come forward that night.

Many of the public who chose to speak criticized the local decisions of the council.

Audience member Ken Flemming spoke to the council, explaining evidence he found which he believed would directly violate the CVRA including, “ignoring minority interest for fear of political consequence.”

As Berry continued, he proposed the idea of originating seven districts to be sprouted out of the city’s center, leaving the demographic and other boundary considerations to be amended later. Berry emphasized that the district structure would encourage citizen voting rate through a vested interest in the center of the city.

The last of the public hearings will be held on Jan. 21 as the council will transition to holding ordinance reading and possible adoption before Feb. 11 to avoid violating the CVRA and facing millions of legal fees.

Additional agenda items included finalizing the Downtown Access Action Plan (DAAP), which was presented on November 5th. During the meeting on Tuesday, the council adopted Resolution No. 97-19 which amended fee schedule 15-090 “Parking Fees and Rates.” The item was lead by Brendan Ottoboni, Public Works Director in engineering.

The city council is also looking into Chico’s anti-price gouging ordinance, which was established following the Camp Fire and banned the price of any item increasing more than 10% including items from rent to services. The ordinance was extended by the council for Dec. 31, 2020.

Moving to the next pressing agenda item, the council considered recommendations for the Commercial Cannabis Citizens Action committee, which are tasked with coming up with a solution on whether or not Chico should allow legal cannabis to be sold or grown in city limits.

As the topic of commercial cannabis hitting the storefronts of Chico lingered in the agenda of the city council, the council was short of the time necessary to have all questions effectively answered. As a result, the council decided to move the subject until Nov. 26.