Campus police take responsibility for actions – Hutchinson will not 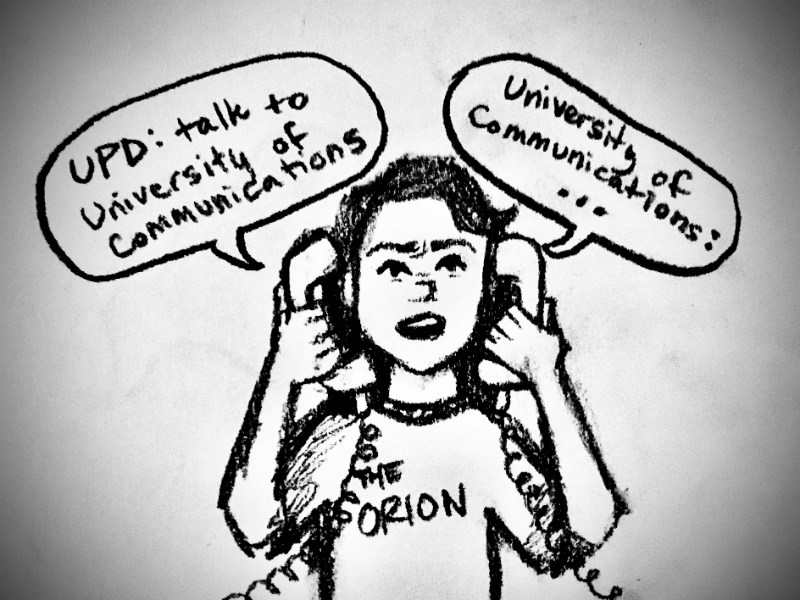 After weeks of ongoing investigation into the Meriam Library incidents this semester, we got a chance to talk to the police chief to clarify things. My concerns, this entire semester, have rested with the control of information by the campus PR department, and these incidents only made it more clear how tight their grip on the university is.

That’s why I appreciated Chief Reid’s willingness to meet with us several times this semester to address our concerns. I want to commend him for taking the time to explain the process behind what happens on campus — even if we disagree with that process and do not feel that the notifications system is working. It is clear that UPD must do whatever the administration asks them to, and any issues with the current system in protecting our student body must be considered the ultimate fault of the administration.

I am still alarmed at how much UPD must follow campus orders to the point when they tell us to go to the PR team for information they should be the experts on. But who is going to be able to change this? Not the Chief, but President Hutchinson.

For any journalist who’s been in the game long enough, the problems our newspaper has faced this year in getting timely, accurate information about campus incidents, and in dealing with University Communications, have been incredibly unacceptable, and should be deeply alarming to anyone in this business.

Even if you’re not as concerned with the issues facing a student newspaper, I would think that concerned student or staff or faculty member is going to be just as concerned about the control of information and protecting free speech.

Here’s why we all need to care about what the PR office has control over. How can a library still be evacuated even if the chief of police does not give his approval? Why hasn’t President Hutchinson ever commented on this serious breach in security? Why won’t the library staff explain their decision to evacuate the library for a potential unconfirmed shooter threat despite the chief’s approval?

As we examined this week, President Hutchinson’s salary raises have been different every year, and it’s per the usual for CSU presidents to continue to be paid more even as tuition also rises. It seems that the president is more concerned with money and new building projects than addressing concerns like transparency and security.

The president’s office has not acknowledged the incidents this semester which deeply concern the student body. Hutchinson has never addressed the student body about the incident involving two Border Patrol officers who tabled in full uniform in the Career Center’s job fair. Even if these officers had clearance from the Career Center to be there, it was clear that the student body was shocked and even hurt at their presence — to the point that Associated Students came forward in their Government Affairs meeting and condemned its effects on the student body. Yet not a word has been said by Hutchinson’s office on the matter, one way or another.

She also has never addressed the fact that the library staff ignored UPD’s advice in a suspicious behavior circumstance and evacuated the library against the Chief’s orders. Shouldn’t that deeply concern the president? I would be surprised if no disciplinary action was taken against the staff in question, particularly as now they are unwilling to comment on the incident to our reporters.

The president’s office took months to release the enrollment data for this year, which was due in August, and has not acknowledged that various factors in our community directly impact these numbers — like the rise in rent prices, a severe lack of housing and ongoing safety concerns after the fire.

The more issues the president’s office refuses to acknowledge, the worse the administration looks. Issues of safety, transparency and control of information must be addressed by the president and if they are not, the school continues to look more and more like it would prefer to bury its head in the sand as long as it possibly can. The thing is, we’re all watching, and so is the city of Chico, and potential future students. Hutchinson cannot hide from the responsibility of addressing these serious problems forever.

There are many strange things going on at Chico State and ultimately it’s on the president’s plate. We as students need to demand more from her and continue to demand a response and an acknowledgement of mistakes. Hold the president accountable and ask for better.