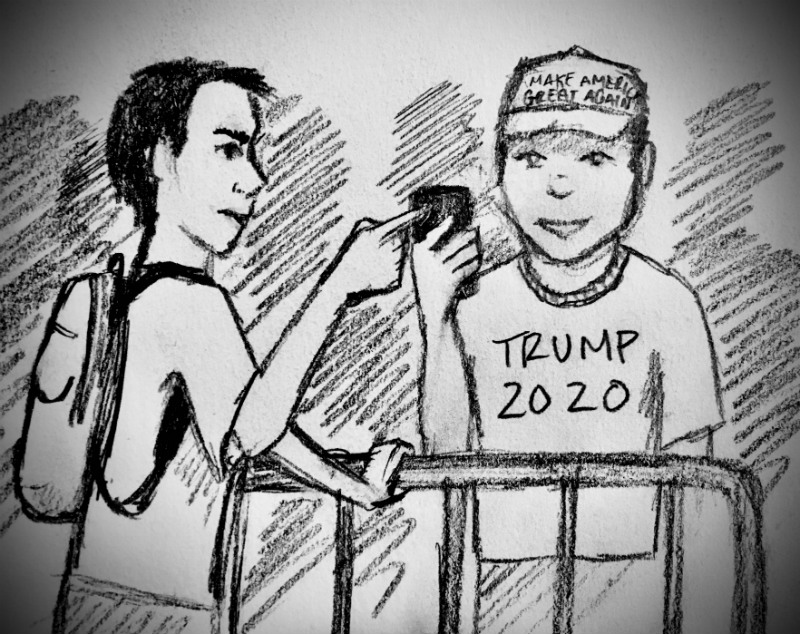 The week before Thanksgiving here on campus was not a good look for us. To say the least. I can’t say I’m surprised by the action taken by the university at this point, but it’s nonetheless disappointing.

The fact that a student protesting hit another student, the president of Chico State Republicans, when he held up an “All Lives Matter” sign next to her on Nov. 19, is disappointing. That the next day pandemonium broke out outside Meriam Library as protestors of the club surrounded them and a debate broke out for hours and ultimately resulted in several acts of harassment, is just embarrassing. That social media ran away with the events of both days is not surprising, but saddening to have to watch.

Chico State became a tool for the ultra conservative online, who don’t even attend our campus, that week, and unfortunately free speech turned into a battleground that the administration was not equipped to handle adequately. However you see what happened during those three days, it was ultimately a failure at healthy, progressive discourse.

I want to be clear that this behavior from the club in question is not new. Chico State Republicans is clearly interested in getting a reaction, as when they called on the campus to start using plastic straws again earlier this fall. Yet their right to free speech is protected, and what happened during that week is not new from the club. The students are on property that can be used for peaceful expressions of free speech. That’s why waving Trump signs and calling for the end of taxes, while it may make you look like a moron to some, should absolutely be protected.

Alleged racist and bigoted remarks should not be allowed from either side, and neither should sexist or harassing comments. The point is to know the difference, and people on both sides got it wrong that week.

That’s why the moment the student who struck Curry with his own sign for doing the same thing she was, holding a sign on public property, became a symbol to use against the left and sent the events of the next day into chaos.

Unfortunately, Chico State’s response came out looking lukewarm at best, or absolutely ineffective and enabling at worst, to both sides.

On the left, the administration’s response was seen on social media as protecting the group by putting up barriers as a “walkway” around the space the tables occupied. This has never been done before, and it’s hard to believe this was done to “control the flow of traffic” as University Communications insists.

On the right, there is anger and frustration that the police did not intervene more in incidents involving those charged with harassment on both days. Viral videos show protestors spitting on club members, slapping people with signs and even flashing their genitalia to one member. Yet, we have been told that police were instructed not to intervene “unless necessary.” What does that even mean?

The president of Chico State Republicans, Michael Curry, alleges that the police were told by the university not to intervene in incidents occurring on that day. He says that police stood by as the reported incidents took place — captured on video by the club. Indeed, police have refused to comment on the investigations into the charges filed and will not provide any information to The Orion.

At what point should the university intervene? At what point is law enforcement protecting one form of free speech over another? If police were indeed present for the incidents that took place that mark the line between peaceful expression and harassment of other students, one would think that would immediately raise alarms. It also raises alarms that “walkways” were set up around the debate in the first place.

Mitigating the power of free speech, and the chaos that can sometimes result when people cannot agree on how to express themselves, is something Chico State is clearly unable to handle smoothly. We are now left with a situation where students who were caught harassing other students on video were again on campus the very next day, and the university will not provide any information on whether they will be punished, academically or by the police, for their actions. Forget President Hutchinson’s email: no information was available to us, the media, on what retribution will actually take place for criminal actions, if any.

It is frightening to see students who support the extreme far right gain traction to such a degree simply by behaving obnoxiously and allegedly making racist comments (whether those individuals were members of the club or not) in videos that resonated online, if not on our campus. It is also frightening to see the other side react violently and cause others to wonder if free speech isn’t such a good idea. Seeing some staff and students on social media fretting about absolute free speech being too dangerous is truly scary, in this time when we really need to protect it.

Most of all, we need a campus that can act on its strongly worded emails and actually do something that shows the difference between friendly, peaceful debates and acts of harassment and hatred. We cannot let something like this end our dedication to free speech or lead to further restrictions on campus. What we CAN do when groups exercise their right to free speech is know what distinguishes productive discourse from harassment and bullying.

Chico State administration ought to know how to respond to situations like these, and hopefully prevent the school from trending on Twitter for videos of racist threats from one side and acts of violent harassment from the other. Sadly, we are all currently left very confused and unsure of what will happen next time something like this breaks out. I just hope that next time, more of our student body understands what they are really allowed to do according to the First Amendment, and what is still a criminal act against another student.