Measure for Measure is a morbid tale of morality 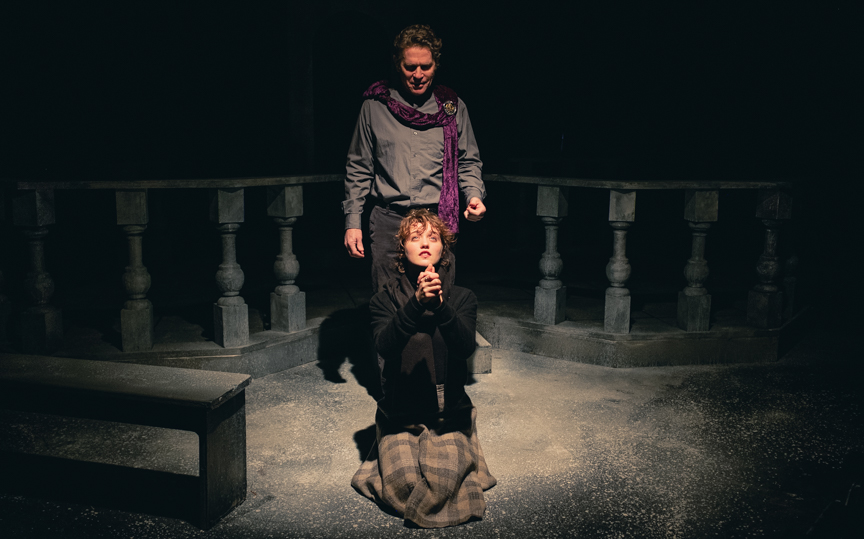 Although the play takes place in Vienna, Austria in the 15th century, it seems to transcend time. According to the program, “the question of time and place is pretty much the same as any Shakespeare play – it doesn’t matter. It is past. It is now. We are human and we make mistakes and crave forgiveness, whether we are in Vienna of 1498 or America of 2020.”

For the most part, “Measure for Measure” has a dark and cynical tone, supplemented with a bit of comic relief. The comedy, however, remains fairly morbid. Some of the most amusing moments during the play feature a character by the name of Pompey (Joseph Slupski) and his witty banter.

At its core, “Measure for Measure” is a story about morality. It begs the question of how far we, as humans, will go to stand up for what we believe is right. Will we blindly follow authority (in this case, the play’s antagonist Lord Angelo (Rob Wilson) who tries a commoner by the name of Claudio for fornication) or will we challenge it?

When Claudio (Slupski) is sentenced to death, his sister Isabella (Alex Hilsee) is faced with a difficult decision. Isabella begs Lord Angelo to spare her brother and he promises to let Claudio go so long as Isabella agrees to sleep with him.

Performances by Slupski and Hilsee get emotional during a scene where Claudio asks Isabella to accept Angelo’s deal. Isabella refuses, telling Claudio that he must die because allowing her virginity to be lost would be much more dishonorable.

“Measure for Measure” ultimately asks its audience to consider issues of morality and how we legislate them. What is revealed is that those in positions of power, like our villain Lord Angelo, are not always morally superior.

Original music for the play was composed, recorded, and performed by Paraic King.

Upcoming performances hosted by The Blue Room Theatre can be found on their website.

Kati Morris can be contacted at [email protected] or @neutralsoymlk on Twitter.