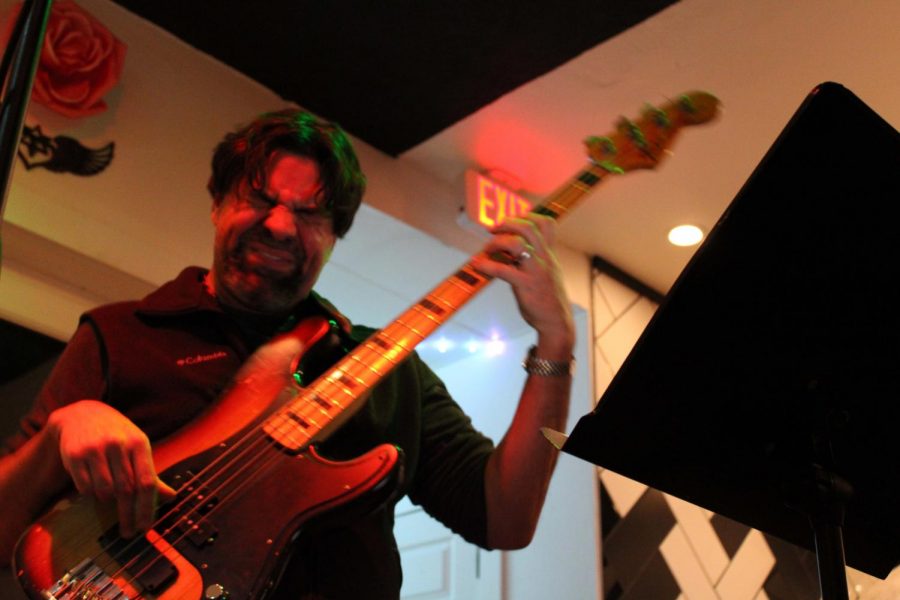 Bassist Jonathan Stonyaoff is the leader of the band. He would be the first to announce the next song title.

It was apparent that most of the crowd were cafe regulars as many didn’t need to look at a menu before ordering their meals. The small space created an intimate setting for both the band and the guests as trio members casually sipped beers with guests before the show began.

As Stoyanoff gave a quick introduction of the band, he spoke briefly about some of the other groups he and his bandmates were a part of. Based on his many musical exploits and impressive performance track record, it was surprising to find out that he did not always see himself as a musician.

“Music was actually my fifth major in college,” Stoyanoff said. “ It was more like, somebody gave me a bass and I was like, ‘well this is cool, I’ll practice for a couple of years and if it goes well I’ll make it a hobby,’ but within less than two years I was in musical school, I had scholarships to go play. My life just kind of flipped on its ear.”

The energy shifted once the trio took to the stage, going from bustling and lively to more attentive and focused as Stoyanoff began playing a soft but spunky tune on his bass guitar. As the other members joined in, it became undeniably evident that these men were truly passionate about their craft.

“I’m blessed to be able to play music,” drummer Michael Curtis Jr. said. “Music never lies to you, it doesn’t ever screw you over, it just gives back to you what you put into it.”

It did not take long for the applause to begin as the band played cover after cover of works by famous jazz artists, such as Miles Davis and Jaco Pastori.

Transitions between songs were usually carried out by Stoyanoff, who seemed to sink into a trance-like state as he closed his eyes tightly and mouthed unspoken lyrics while his hands seemed to take on a mind of their own.

A soulful crowd looked on, taking in the captivating ability of the artists to make complex and intricate chords look almost easy to play. Their interactions with one another were lighthearted and enjoyable to watch, often smiling pridefully during one another’s solo.

“I met Jonathan (Stoyanoff) maybe like four or five years ago when he had a group called The Bumptet, it was like a fusion rock-jazz group,” guitarist Arlyn Anderson said.  “We started playing together in The Bumptet, Jonathan introduced me to Michael Curtis, the drummer, maybe within a year or so after that and we’ve done just a little bit of jazz trio stuff like this a couple of times a year.”

As the show drew to a close, the trio performed an original song of their own creation, jokingly mentioning how it was only their second attempt at playing it. The song mirrored the jazz tones of the night but added a reggaeton like sound.

During the last few songs of the night, a few audience members even began to dance where they stood and clapped along to the beat.

The show was a perfect example of Tender Lovings’ ability to bring community members together, through music, food, and delicious lavender lattes.

Kirstin Joyce can be reached at [email protected] or @joyce_kirstin on Twitter.