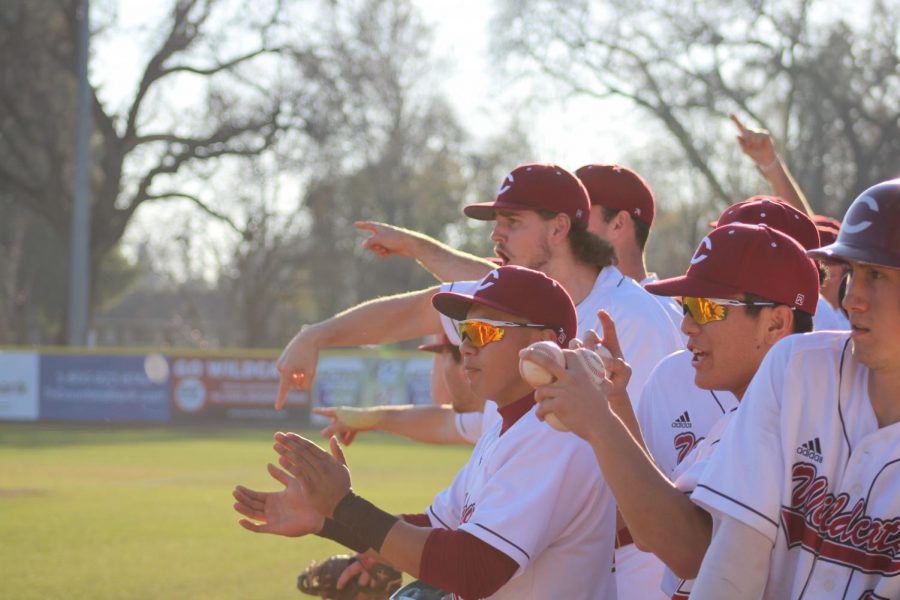 The Wildcats cheer their teammates on.

JT Navarro stepped up to the plate in the the top of the third inning with the bases loaded and a four run lead. Navarro wasted no time, swung at the first pitch he saw and blasted a towering moon shot to deep left field to extend the Wildcats’ lead 10-2. Navarro trotted around the bases and was met with his teammates screaming and cheering for him.

The Wildcats took care of business at Nettleton Stadium, winning 14-7 against the Fresno Pacific Sunbirds during the home opener of the 2020 season. The Wildcats’ seven-run third inning rally was just one of the hitting displays they have been putting on entering the new season.

“The pitcher happened to hang one on the first pitch, and I saw it well. I got a lot of off-speed my first few at bats, so I knew the curve ball was coming,” Navarro said with a smile.

During the last two games for the Wildcats, their offense has been red hot putting up 27 runs. According to Navarro, the team is full of grinders.

“We take some good at bats, and we see good pitches,” Navarro said.

Christian Stiegele, a senior RHP, was given the ball to start the three game series against the Sunbirds. He silenced their bats, going four innings and allowing two hits. The only traffic he allowed on the base paths came in the second inning when the bases were loaded. Thanks to a strike out and two pop ups, Stiegele escaped unscathed.

“I thought I had some good stuff today,” Stiegele said. “I just kept doing my thing, and I didn’t let it bother me. I knew I could make good pitches, and I trusted my stuff.”

After the third inning, the Wildcats put the game in cruise control and continued to have fun with lots of players contributing hits. Nate Maggi added an RBI single in the fifth, and Turner Olson added a RBI double to take the lead to 13-4.

The Sunbirds used a three-run eighth inning rally to put some numbers next to their name, but the Wildcats remained in control. Senior Tyler Grissom was stoked for their first win at home.

“It feels amazing. Last year was rocky with home games, so it feels good to get that first home win out of the way.” Grissom said.

The Wildcats look to continue their success on Saturday, Feb. 9 as they are back at Nettleton stadium for a double-header. The first game of the day starts at 11 a.m.

“We just got to keep playing hard, keep having fun and see what happens,” Grissom said.