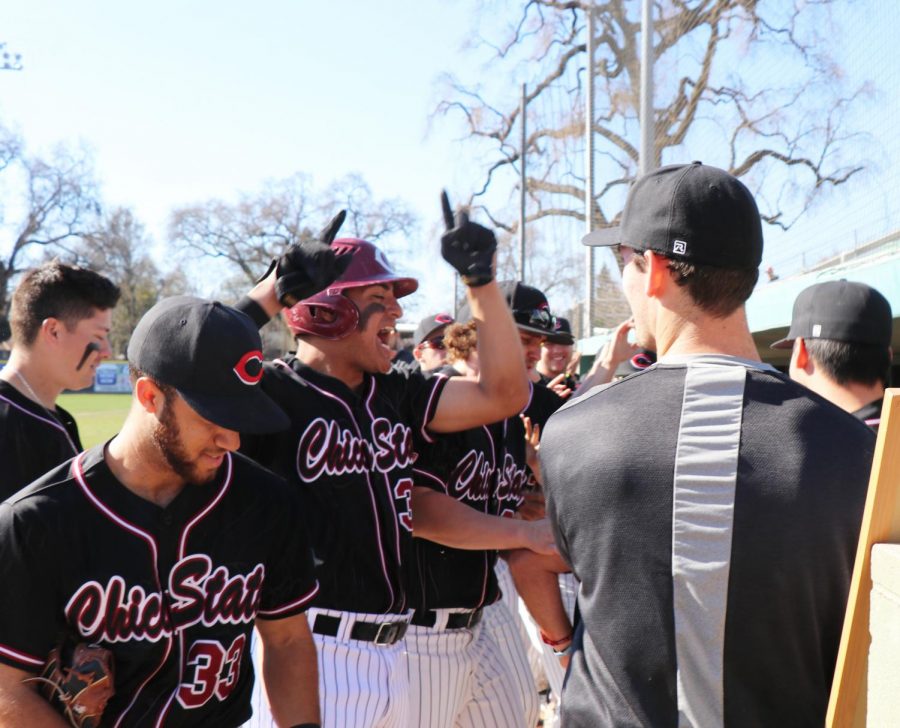 Aidan Rasmusson gets excited after scoring a run.

In the bottom of the ninth inning in game two of the double header, Willie Lajoie stepped up to bat in a crucial situation for the Wildcats. Pressure was on. Lajoie drilled one up the left-center gap right past the shortstop for a Nettleton Stadium walk-off to complete a three-game sweep over the Fresno Pacific Sunbirds.

“I read the scouting report before, and I knew he (the Sunbirds’ pitcher) liked to throw off-speed with runners in scoring position,” Lajoie said. “He threw a first pitch fastball, and I was a little confused. He threw me a slider, and I got a little in front of it and it barely got by the shortstop.”

Game one of the double header was a hitter’s dream. There were 31 combined runs, 34 combined hits and nine overall errors. Only one inning occurred where one of the teams did not put up at least one run.

The Wildcats were swinging hot bats from the start to put the game out of reach by the fourth inning. They had a 9-0 lead after four. JT Navarro, Turner Olson and Cody Wissler all drove in runs early in the game.

Left-handed pitcher Grant Larson got the call to start and had a solid day on the mound. Larson went five innings and allowed four runs, all of which were scored in the fifth inning.

“I pitched alright,” Larson said. “We had the offense real early, so it took a lot of weight off my shoulders. I just had to keep pounding the zone.”

It wasn’t until the fourth inning when the Sunbirds’ bats started to wake up. They put up 11 runs in three innings to make the score 16-11.

Tuner Olson then blasted a home run in the bottom of the eighth inning, and the Wildcats put up a ridiculous 21 runs in the first game. The final score of game one was 21-11.

This was a much quicker game with both pitchers executing well. Braeden Gowdy was on the mound for the Wildcats. The first run of the game came courtesy of the Sunbirds’ Hayden Hayes in the fifth inning.

The Wildcats then came up in the sixth inning and tied it up with an RBI double from Eddie Zavala. The team was fired up.

Chico State escaped a nightmare in the eighth inning by getting out of a bases loaded jam thanks to two strikeouts and one pop-out.

Then, Lajoie stepped up to bat in the bottom of the ninth and hit his walk-off to complete the sweep. The Wildcats won the second game 2-1. Over three games, the Wildcats put up 37 runs while allowing 20 runs.

“It was awesome,” Lajoie said. “It’s always great to get a sweep at home, especially against those guys. I love beating those guys.”

The Wildcats are on a roll at home, and they will be back at Nettleton Stadium Feb. 14 at 2 p.m. to take on San Francisco State.