Wildcats complete sweep over the Otters 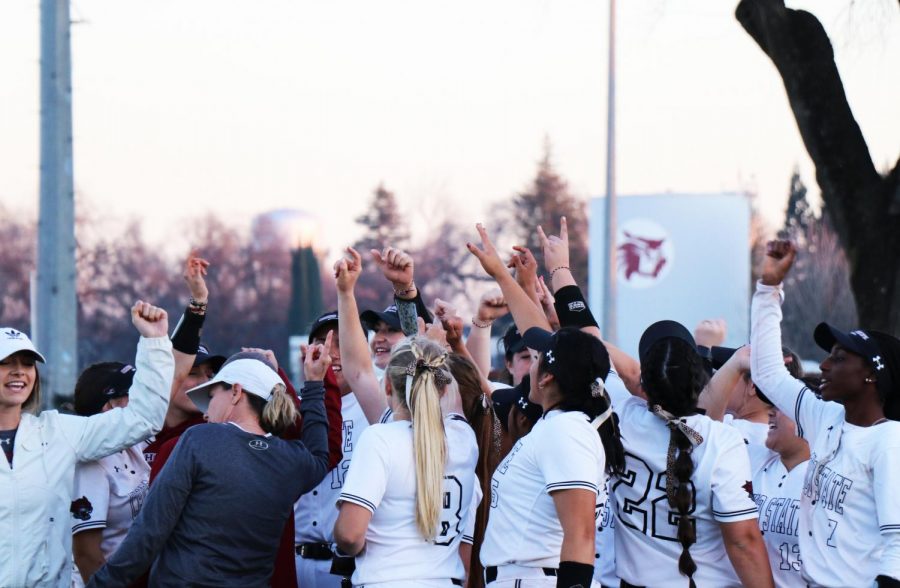 The Chico State softball team won both games of their doubleheader against Cal State Monterey Bay on Saturday, Feb. 8 to sweep their first home series of the year.

The Wildcats showed flashes of brilliance offensively in both games. They won game one by a score of 4-3 and dominated game two 9-0 in just five innings. Both games featured clutch RBIs, two-out rallies and aggressive base running.

The Otters showed up to University Softball Field eager to even out the series after dropping both games of the prior doubleheader. The Otter dugout was exploding with chants and cheerful yelling all throughout the day. Unfortunately for the Otters, the Wildcats’ cool and calm demeanor shut down any hope of a victory in either game.

Game one of the doubleheader featured Brooke Larsen in the circle for the Wildcats. This is rarely a good sign for opposing teams, as Brooke has started this year on a tear. Larsen came into the day with a 4-0 record, .60 ERA, and 46 strikeouts in 30 innings pitched.

The first game began slowly offensively for both teams. It was a pitchers’ duel throughout the first four innings. Larsen overwhelmed the Otters with her velocity. She consistently utilized her rise-ball, which caused Otter batters to swing out of their shoes at balls high outside the strike zone. Starting pitcher for Monterey Bay, Cassie Gasper, found early success, too, especially with her change-up which froze Wildcat hitters.

Gasper shined throughout the first four innings, allowing only one run in the bottom of the 3rd off an error. This was followed by Kristin Worley’s best Houdini impression, escaping a pickle for a Wildcat 1-0 lead.

“You just have to trust yourself that you’re going to get out of those situations. For me, it worked out,” Worley said regarding her successful pickle escape.

“We haven’t let the pressure get to us…We were really aggressive, especially today, because we have seen these pitchers already,” Rodriguez said.

The Otters brought their intensity up in the sixth inning. They racked up hits on back to back Larsen pitches in the second and third at-bat of the inning. Then, a double to right-center brought in their first run of the game. With runners in scoring position, a costly error off a bunt drove in two runs, making the score 4-3. The tying run on second base, Otters’ infielder Jamie Sugimoto cracked a line drive to center field and sent the runner on second barreling home. However, Wildcats’ center fielder Virgie Robello threw a bullet home for the out and possible game-saving play.

The Wildcats faced more trouble in the seventh inning as Brooke Larsen loaded the bases with two outs. Left-handed pitcher Sam Mulock came in for relief and got the save. She struck out the lone batter she faced and ended the game.

Game two of the doubleheader was far more lopsided. Mulock followed her save in the first game with a dominant win in the second. She hurled a complete game shut-out, allowing only two hits and striking out six throughout the five-inning game.

Unlike the first game, Chico State started swinging hot right of the bat in game two. Batters were shelling Otters’ starting pitcher Hayley Fein as she gave up nine earned runs in just 3.2 innings pitched. The Wildcats got ahead early, scoring two runs in the first inning off big hits from Worley and Rodriguez, a costly error by Otters’ infielders and a bases loaded hit-by-pitch on Reilani Peleti.

“It (the early lead) definitely takes pressure off of me because I can relax a little bit,” Mulock said.

After a scoreless second inning, the Wildcats came back for more in the third inning. The team scored seven runs off six hits, extending the lead to 9-0 and effectively putting the game out of reach for Monterey Bay.

In attempt to stay undefeated, Chico State will hit the road to face Humboldt State in a four-game series starting Feb. 21.