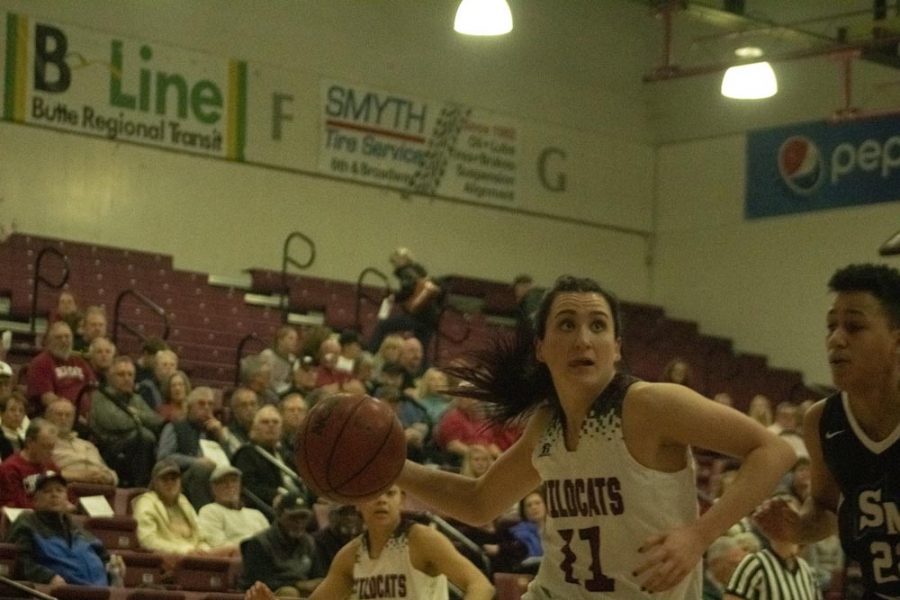 Brynn Thoming makes a move to the rim from the low post.

It was an intense night in Acker Gym as the Wildcats took on the California State San Marcos Cougars. Unfortunately, the game would end in a loss for the Wildcats with a final score of 57-69.

This loss to the Cougars makes the second straight game lost for the Wildcats. Forward Haley Ison expressed her thoughts on the recent struggles her team has had during these past two games at home.

“Tonight, we started off a lot slower than we should have,” Ison said. “We put ourselves in a place where it was hard to dig ourselves out of the hole. We just couldn’t knock down the shots that we really needed to at important times.”

Ison, who left the last game early due to injury against UC San Diego, came back out tonight and put up seven points. She had overcome what looked to be a scary injury that could have kept her out for numerous games. Ison played 22 minutes, had one assist and three steals, which unfortunately, was not enough to secure a team win.

“It was a pretty bad muscle strain, but it wasn’t too bad of an injury that would put me out,” Ison said. “The trainers assured me that based on how fast I was healing already, they were pretty confident that with all the rehab I had been doing I would be able to play tonight.”

The Wildcats took the lead going into halftime where they were up 31-30. In the second half of the game, San Marcos came together and outscored the Wildcats by five points in the third quarter and eight points in the fourth quarter. Forward Mikaila Wegenke talked about what she felt was the cause of her teams collapse during the second half.

“I almost feel like we got into our head and we started thinking like we’re down,” Wegenke said. “Everyone started freaking out and almost put their head down. We can’t do that. We need to be confident in ourselves and our abilities and know that we’re going to get the job done no matter who and what stands in our way.”

Guard Shay Stark was the leading scorer in the game against San Marcos with 13 points. She feels her team must make adjustments moving forward in the remainder of the season.

With this game behind them, the Wildcats now turn their attention to their next opponent, Cal Poly Pomona on Feb. 13.