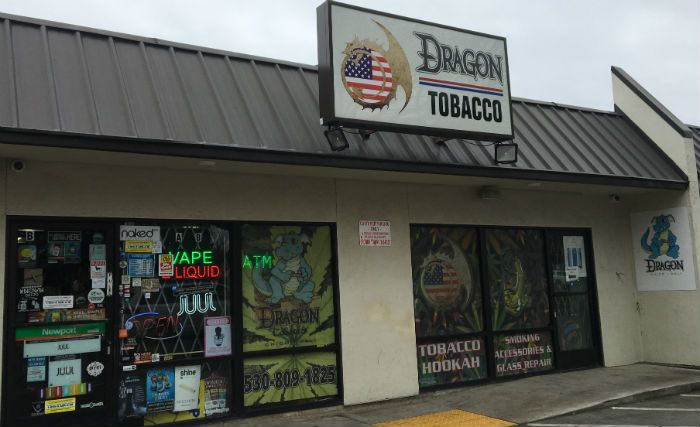 Dragon Tobacco, a local smoke shop, is concerned about the ban taking place in Oroville regarding flavored tobacco products.

Oroville’s City Council met to confirm a ban taking place in less than a month that will prohibit the sale of flavored tobacco products.

Council members had two public meetings where each member supported the ordinance.

With the new ban, only tobacco products that are created from real tobacco leaf or are flavored like tobacco will be allowed for sale in Oroville. Fruit, menthol and other flavorings will no longer be sold within the City of Oroville limits.

Many individuals are in favor of this ban, including Chico State student Chance Badger. Badger is against flavored vape juices and thinks the ban will reduce health issues caused by flavored tobacco.

“I am not against the ban and think it is smart considering all of the recent issues with health problems that result from vaping,” Badger said.

This issue is highly controversial as these products have become popular with young adults.

“Fewer people will have it easily available so it will most likely be used less by young adults in the area,” Badger said.

However, not all students agree with Badger. Chico State student Alex Deaser understands why the ban is happening but thinks it will be ineffective.

“I don’t really feel like it is going to change the number of young adults using tobacco products or even vapes,” Deaser said.

Local smoke shops such as Dragon Tobacco are strongly against Oroville’s ban. Manager Josh Rector has worked at Dragon Tobacco for the past five years and feels like this ban will have many negative consequences.

“I think it’s ridiculous,” Rector said, “I am not saying (vaping) is good for you but I do not believe you should take someone’s rights away. I understand regulating it, but banning it all is not the right choice.”

Rector believes this ban will negatively impact the economy of the area and that many people who work at smoke shops in the area could lose their jobs. He wishes that council members would take into account the interests of local smoke shops and how the ban will affect these businesses.

Rector said that if a similar ban were to happen in Chico he would like there to be more open communication between the council members and the smoke shops. He has tried to get more information about whether Chico City Council plans to ban flavored tobacco, but has been unable to get useful information.

“I do not like the way council members went about it,” Rector said, “Council members do not realize how it is going to take a hit on us. It is kind of sad.”

Courtney Collier can be reached at [email protected] or on Twitter @CourtneyC_News.