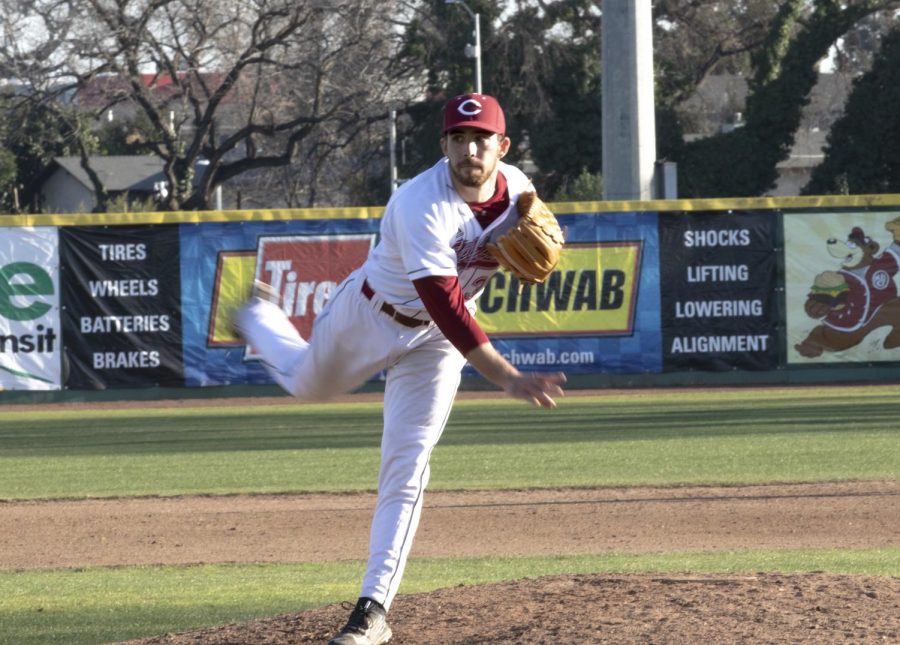 Daniel Foret on the mound for the Wildcats,

On Saturday, the Chico State Wildcat baseball team hosted the San Francisco State Gators in a doubleheader. The Wildcats took a tough loss in game one, 2-7, and won a nail biter in game two, 1-0.

These were the second and third games in a four-game series against SF State. The Wildcats won game one on Friday, so Saturday’s games put them ahead 2-1 in the weekend series.

Junior Braeden Gowdy took the mound in game one. Gowdy was coming off Wildcat of the Week honors prior to this weekend’s games for his stellar performances against Azusa Pacific and Fresno Pacific earlier in the month. He pitched four innings allowing eight hits, three earned runs and six strikeouts. Gowdy had control issues throughout the game, especially early on, beaning two Gators in the first inning.

“I had a little bit of a rough day on the mound. The guys were there to pick me up out of the bullpen,” Gowdy said.

Although Gowdy did not feel like he played up to his potential, he only allowed three earned runs due to his ability to get out of tight spots. He left a bulk of runners stranded on base and was able to get out of a bases loaded fourth inning with a double play.

Offensively, the Wildcats had issues with Gators’ starting pitcher Jordyn Eglite. Eglite pitched 5.2 innings, allowing four hits and one run. Chico State was held to just one hit through the first five innings of play.

“We just couldn’t lay off the high fastball, and he was throwing a good cutter. We let him get into a rhythm,” senior left fielder Turner Olsen said.

Olsen was the only Chico State hitter with multiple hits in the game, going 2-3 with a walk.

While SF State was controlling the game throughout, the score remained 1-4 until the seventh inning due to stranded baserunners. When the seventh inning rolled around, the Gators scored three more runs on four hits, extending their lead by six.

Chico State managed to put up a run in the bottom of the seventh off an infield error, cutting the lead to 2-7. This would be all for Chico State. The last two innings were scoreless, and the Gators won game one of the doubleheader.

The second game of the day started off with the big right-hander Christian Stiegele on the mound. Stiegele started out strong, tossing three-up-three-downs in the first two innings. His fastball had a healthy snap throughout the outing, pounding the corners of the zone with pinpoint accuracy. Stiegele did not allow a hit until the third inning, as fatigued Gators batters had difficulty keeping up. He pitched 4.1 innings allowing three hits, no earned runs and five strikeouts.

“I was going to get the win no matter what and trust my guys behind me…command my pitches as well as I can and carry that momentum with a little chip on my shoulder,” Stiegele said about pitching after a loss.

The Gators were strong on the mound as well. Starting was the undersized, yet crafty Tyler Franks, who played club ball for the Chico Aces before his time at SF State. The 5-foot-10-inch, 170-pound Franks, went three innings, allowing two hits and one earned run.

The lone run of the game was scored in the second inning. The sequence began with junior Adam Muñoz taking a lead-off walk. A beautiful bunt by right fielder Eddie Zavala brought Muñoz into scoring position at second base. A ground ball by junior catcher Nate Maggi then moved Muñoz to third base. Senior third baseman Jorge Perez brought in Muñoz with an RBI single up the middle, giving the Wildcats a 1-0 lead.

Stiegele was pulled in the fifth-inning allowing Wildcat senior reliever Daniel Foret to shine. Foret threw 1.2 hitless innings before handing the ball over to senior pitcher Kristian Scott in attempt to secure the save.

Scott entered in the seventh inning and quickly retired the first two Gators batters. He pegged the next batter and allowed a walk to the following batter, which put two runners on. With the game on the line, Scott faced SF State catcher Jason Hare who worked the count full. Scott reared back and threw a hard fastball, freezing Hare in a caught-looking strikeout, ending the game.

Chico State was backed with plenty of support from the fans, helping them to secure the victory. The stands were filled up with more fans in game two than game one, and the energy in the stadium increased throughout the day.